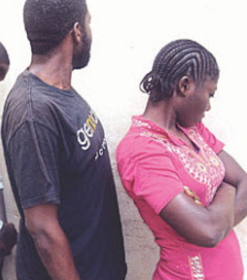 The Lagos State Police Command has arrested a housemaid who robbed her madam of cash and valu­ables worth several mil­lions of Naira. Also in Police net is the elder brother to the house help.

The housemaid, Chidima (other names withheld) and her brother, Emma, indi­genes of Ebonyi State are being detained at the Spe­cial Anti Robbery Squad (SARS) Ikeja.

“I actually committed the robbery. I waited for my madam to leave for office and I ran­sacked the house. I collect­ed expensive things, such as, laptops, tablet, Ipads, gold, phones and money. I then called my elder broth­er to meet me somewhere and handed everything to him for sale.

“After handing over the items to my brother, I re­turned home and raised the alarm that robbers have raided our house. My madam believed the story and even treated me think­ing that I may have been injured. I was crying all through and Madam was pleading with me to stop crying so that I won’t break down.

“Sir, I must confess, I did it to raise money for my mother’s surgery. She has been sick and our Doc­tor charged N500,000 for the treatment. I begged my madam to assist me but she said she had no money. I have tried many of our rela­tives, none was willing to help and my brother kept disturbing me with phone calls. The harassment was too much for me to bear, hence, I decided to remedy the situation by robbing my madam.

“I may not have told my brother that I robbed my madam, but where did he think that I got the things I gave him to sell? I am a housemaid on a monthly salary of N20,000. My brother should stop blam­ing me, after all, it was his mistake that put us in this mess. I successfully per­fected everything and my madam had no iota of sus­picion that I did it.

“Instead of selling the items my brother started using the Tabletops and it was through his foolishness that the police tracked and arrested him. I was shocked when he was brought face-to-face with me. Let him stop crying and admit what we did. Let us carry our crosses. My only re­gret is that my mother is still sick and we have been subjected to ridicules. If I had known, I would have allowed things to work out their natural ways.”

His elder brother who was weeping like a baby said:

“She did not tell me that she stole the things. She told me that her madam gave her the things. I was so happy and told her that I should thank her madam for the gift but she prevent­ed me. She said her madam does not like people show­ing appreciation when she does good things. She is my sister, so I believed her. Now that I know the truth, I will never trust her again. I want the Police to forgive us as we are first offend­ers.”

The State Commis­sioner Of Police, Mr. Fa­tai Owoseni said: “The Househelp was employed three months ago through the internet. She belongs to a syndicate that send its members to houses as house helps with the inten­tion to rob their employers. She would have committed more havoc if detectives did not crack the syndicate on time. That is why we are always appealing to the public not to employ domestic staff through the internet.