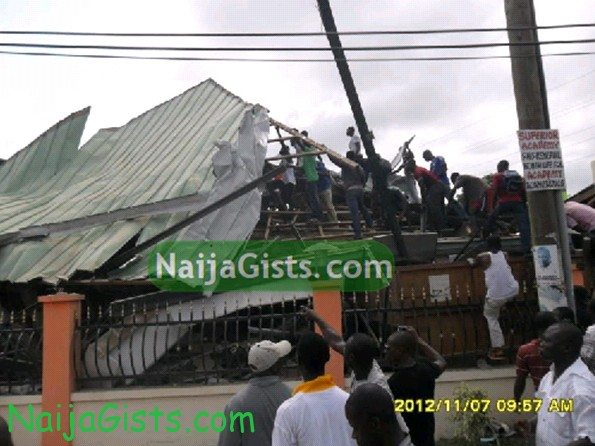 A 4-storey building that houses a popular shopping mall (shopping center), Achimota Melcom building has collapsed in Achimota, a suburb of Accra, Ghana killing 3 people while trapping over 200 people. naijagists.com

According to BBC reporter, Sammy Darko, one person has been rescued so far.

We learnt the President Of Ghana, John Dramani Mahama has suspended his campaign for the upcoming election and is currently on the way to the scene of Accra Shopping Mall collapse.

A resident identified as Ama Okyere who witnessed the collapse said:

“I was very close to the mall because I was going to buy something only for me to see the building coming down,” r

“I had to run for my life. I was so terrified. I believe there are lots of people trapped under this because this is a heavily patronised shopping mall in the area.”

President Maham expressed his condolences via his Twitter page few minutes ago and he said:

“My prayers are with the workers, shoppers and others who are trapped in the rubble of the Achimota Melcom building.” (Credit: BBC)