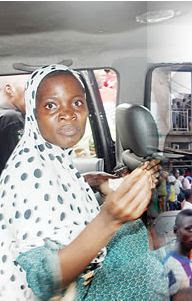 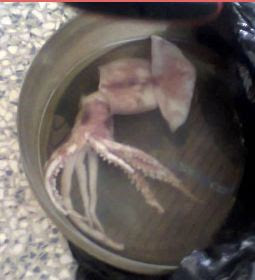 June 25, 2013 – Strange Frozen Fish That Turns Into Human In Ibadan Is An Octopus (Photo)

On Tuesday, a fish seller named Ramota in Ibadan, Oyo State Nigeria claims a frozen fish she bought from a wholesaler turned into a human being when she attempts to de-freeze it.

If you missed the detail story please click here to read it.

According to a detail report on The Nigerian Television Authority (NTA) yesterday, the half-human half-fish is actually an octopus.

While watching watching the news story, I couldn’t but laugh out loud because the way the lady described it was so scary.

“I was shocked to see the frozen fish developed into a living being in  the water, the description of which showed half human and half fish. I  quickly called by father and some alfas to see the strange fish.” – said Ramota, the frozen fish seller

Even her father verified her claim;

“ It was around 11am, when I started  hearing the voice of my daughter while I was resting on my bed. She was  shouting and screaming, such that people in the compound were attracted.  Then, I decided to check what the problem was. I took along my Quran  and on getting there my daughter has gone to call Sheu , a Muslim leader  in the neighbourhood .
I saw the strange fish inside water in  the bucket. It was strange. How can a fish bought in the cold room developed into human? That I cannot fully explain.” – said Ramota’s father

Wonders shall never end in this country ooooo.

Thanks for making our day Aunty Ramo.

Hollywood Actors & Celebrities Who Are Nigerians (Photos)
Is This Paul Okoye’s New Girlfriend?