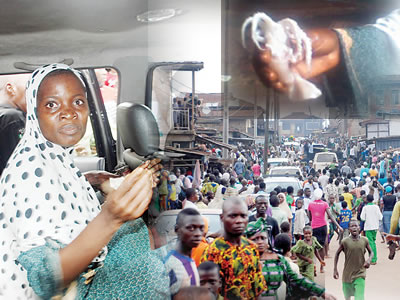 This is one of the bizarre stories that happened in Ibadan, Oyo State Nigeria on Tuesday the 23rd of July, 2013.

It happened precisely at Ile Akindele in Asaka area of the capital city of Oyo State yesterday.

A frozen fish seller claims she saw the strange creature after removing the frozen fish from the box.

Hear Ramota in her own words below;

“I went to where we usually buy fish at Kola Eleja, Oke Ado, Ibadan. After I finished, I boarded Okada to my place to prepare the fish for sale.

Before getting the fish out of the ice-pack, we needed to use knife to remove them and use water to de-freeze. I was shocked to see the frozen fish developed into a living being in the water, the description of which showed half human and half fish. I quickly called my father and some Alfas to see the strange fish”.

The father of the woman, a retired civil servant, Pa Rauf Salawu who corroborated the story said he had never seen such a thing before.

He narrated his own side of the story saying, “it was around 11am, when I started hearing the voice of my daughter while I was resting on my bed. She was shouting and screaming to the extent that people in the compound were attracted.

Then, I decided to check what was the problem. I took along my Quran and on getting there, my daughter had gone to call another Muslim leader in the neighbourhood.

I saw the strange fish inside water in the bucket . It was strange, how can a fish bought in the cold room develop into human. That I cannot fully explain.”

Due to the crowd, police men from Mapo police station were there to control the crowd.

The fish seller was then taken into the custody of the police. Several calls made to the police were not picked.

I wish they can provide us with the actual picture of the fish.