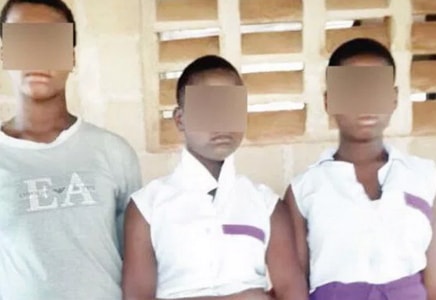 The command’s spokesman, SP Ebere Amaraizu, said in a statement on Tuesday that the feat was achieved by operatives of the command’s Anti-Cultism Unit after an investigation.

He said that the duo had indulged in cult activities and related crimes for some years until they were arrested by the operatives of the Anti-Cultism Unit.

The police spokesman said the suspects were allegedly gang raping their female victims who were mostly secondary school students before initiating them into a female cult group identified as White Angels Cult.

Amaraizu said that White Angels Cult is a sub-cult group for female folks in T-stars and Ayez confraternities.

He said that one of the suspects, Onuh, revealed that he was a plumber living with his sister at Mount Street, Enugu, from Isiogbo Nara in Nkanu East Local Government Area; and that he was the Coordinator of T-Star confraternity in the state.

He said Onuh joined cult group in 2015 as an SSS I student of a secondary school in Enugu (name withheld) and that he was initiated at a bush behind the said school.

“I joined the cult group out of peer influence and they promised me that they would always be there for me in case anybody troubled me and that I would become a notable person in the society.

“And that I can have any woman any time; but I regret that the contrary is the case now,’’ the police spokesman quoted Onuh as confessing.

He further revealed that the last secondary school girls that Onuh and his gang-raped were brought by one Oliver also known as Chaplet, who was a conductor to the driver that normally brought those girls on school bus after their school hours.

“On his part, the other member of the cult group, Egwu, who is also known as Killer, is an ardent member of the T-Star confraternity that hails from Amoli Awgu community and also lives at Mount Street, Enugu.

Amaraizu revealed that Egwu was initiated into the cult group in 2014 when he was in JSS III but that was at Coal Camp axis of the state when he eventually dropped out from school and later joined the work of tiling and from there he met Emmanuel Onuh.

He said that Egwu also said interested secondary school girls were usually gang-raped before they were initiated into the White Angels Cult.

He said a full-scale investigation into the incident had begun.