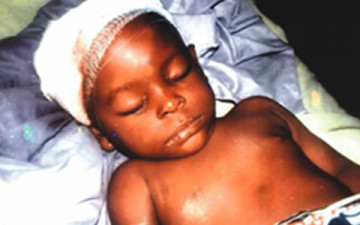 Taiwo Lawal, a 1-year-old baby boy who was shot on the head by some armed robbers in Lagos on the 9th of September 2012 has died.

According to Punch Metro, Taiwo Lawal was brutally shot on the head at his family house in Gbagada area of Lagos on Black Sunday, the day that many Lagosians experienced series of simultaneous armed robbery attack that led to the death of a police officer.

The story also drew public interest as concerned members of the public also donated undisclosed sums of money. Sadly, Taiwo gave up the ghost on March 7, 2013 at Ward E of the hospital. The deceased’s distraught father, Wasiu, said the death was more painful because of the amount of money the family had spent.

He said, “We spent all that we had but unfortunately my son did not survive. After MTN donated N500,000 and few concerned members of the public gave us money, more expenses kept coming up. The money was not enough as we had to keep spending on drugs and other things. “After the MTN donation, Taiwo was operated on and he showed signs of improvement at the Intensive Care Unit of the hospital.

A couple of weeks later, after the bullet had been extracted, he was transferred to the main ward but in late December, his health started to deteriorate, he lost weight and we had to take turns to watch over him.” Wasiu said although doctors at the hospital initially assured him that Taiwo’s brain was not affected by the bullet, he was later told that the bullet had affected the baby’s brain.

The hospital wanted to discharge him but I objected to it because he obviously was not alright. “In late January, his health deteriorated and he could not breathe on his own and was placed on Oxygen. At that point, the doctor advised that we flew him abroad for treatment as it was now beyond their capability.

However, last week he showed signs of improvement and was even eating. “We were already happy but unfortunately on Thursday afternoon, Taiwo passed on, leaving behind his twin, Kehinde and two other siblings.” (Punch Metro).

So sad may his soul rest in perfect peace.