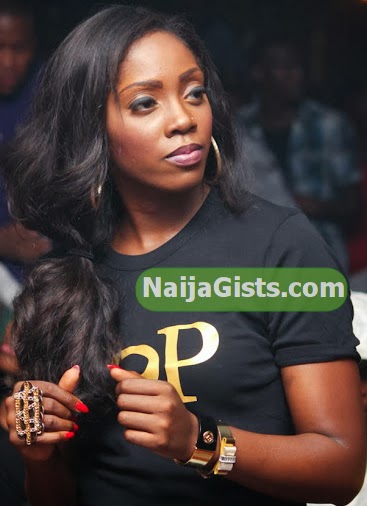 Popular Nigerian songstress and Mavin First Lady Tiwatope Savage aka Tiwa Savage might have been arrested by Lagos Police command for allegedly humiliating a police officer on duty.

Why Tiwa Savage Was Arrested

According to unconfirmed rumour currently circulating the web like wildfire, newly married Tiwa Savage was arrested on Friday right in front of Eko Hotel after she angrily removed the cap of a police officer on duty and threw it away.

Diamond Celebrities disclosed that the Forte Oil ambassador allegedly violated traffic rule on Friday before a police officer stopped her.

While she was being interrogated, she angrily stepped out of her car and demanded to be released, when the office insisted she violated the traffic rule, Tiwa Savage got pissed off and removed his cap from his head and threw it away.

Immediately the humiliation happened, the officer called for backup and Tiwa Savage was arrested and taken away to an undisclosed police station.

A source said she has been released from police detention after her manager came to secure her bail.

Stay in touch with us as this story develops.

I can’t believe this, I hope the story is not true because Tiwa Savage is a very polite woman.