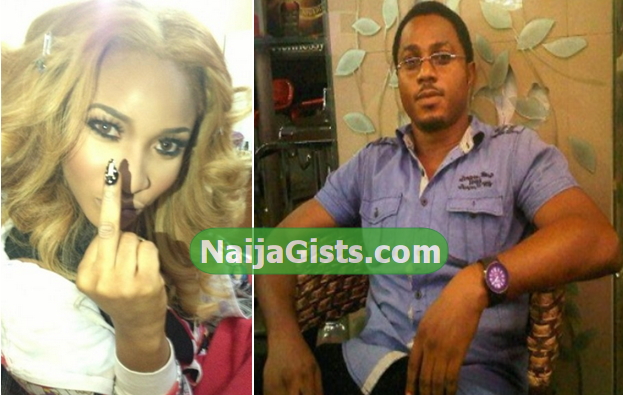 In another blow to the actress, film director Chima Okoroji alleged he engaged in a serious war of words with the actress on a new movie set in Enugu recently over her rudeness.

While filming the movie titled African Pride, Tonto Dikeh allegedly fought with her senior colleagues like Ken Okonkwo, Ngozi Nwosu and many others on the movie set.

She eventually walked out on all of them after she was called to order.

Hear Chima in his own words below;

“While on set, she kept on insulting, fighting and quarreling with everybody. She was very rude and uncouth on set. Whenever I tried to correct her, the producer, Kaycee (Filmark), will intervene and beg me not to confront her. But I got pissed and eventually called her to order when I could no longer take her insults and rudeness. She immediately flared up and started insulting me publicly in the presence of my cast and crew members.

And when some of her senior colleagues tried to intervene, she also tongue lashed them. Tonto walked out on us the moment she was done with her insults and refused to shoot till the next day after many pleadings by the producer. She even threatened to arrest and deal with me for daring to call her to order on set. Another problem I had with Tonto on set was her too much drinking and smoking, which she uses to delay my production. It was so bad that the owners of the house where we were shooting told us to leave because they were tired of inhaling the smoke from her incessant smoking. She needs help and prayer,”

“Tonto messed up my set, insulted me and many stars on set, including Ken Okonkwo, Ngozi Nwosu, Prince Nwafor and others by walking out on my set for a whole day, because I called her to order – Chima Okoroji alleged.

Her attitude problem became obvious when she took to Twitter few weeks ago to insult her colleague Mercy Johnson, calling her all sorts of names for resuming acting months after giving birth.

Mercy Johnson ignored all her insults, a move that gave MJ favour from several movie producers who bombarded her with scripts.

Maturity is indeed a virtue.