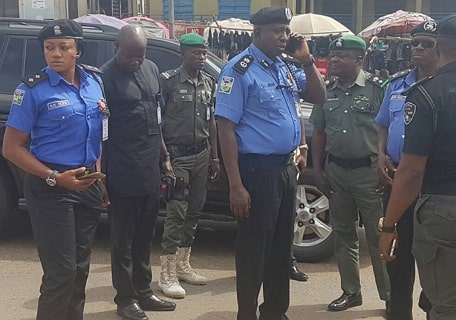 The Nigerian Police Force is an outdated, inefficient and corruption-ridden institution that lacks the ability to fight crime in the 21st century.
The lawlessness of the Fulani herdsmen has yet again brought into focus the heightened insecurity of living in Nigeria. This has led to a number of Southern states to consider expelling them from their lands. This is a very tricky situation: the constitution of Nigeria stipulates that anyone has the right to live and work where ever they want to. A breach of this might lead to ugly tit-for-tat situations: you expel them from the South and they respond by expelling your people from the North and before long we’ll be witnessing bloody inter-tribal clashes as last seen in 1966 that lead to the Nigerian- Biafran civil war.

The problem here is not just the Fulani herdsmen, who have been allowed to get up to all sorts over a long period of time, unchecked, but the lack of security operatives to deal with the problem before it got out of hand. Where are the police and the army, ask the people?( – probably busy shooting innocent protesters or guarding VIPs!)
The mischief makers are not just the Fulani herdsmen but also cultists, Boko Haram, kidnappers and armed robbers killing innocent people on a daily basis with the security services powerless to stop them because they lack the Strategic intelligence to know who’s doing what; lack the ability, will and equipment to mobilize quickly to deal with situations and are further hampered by a slow bureaucratic chain of command that takes its orders from the Head of Police in Abuja.

The Federal Government needs to understand it’s time to dissolve the Nigerian Police Force, as we know it, and let each and every state set up their own police forces to deal with insecurity and crime: an Inspector-General of Police, sitting on his backside, in Abuja can’t know the crime situation in Lagos or Kogi intimately as the indigene police officers and can’t deploy his men effectively. State policing is proven to work well as we see in countries like America. We can see a good example of how effective state policing can be with Amotekun, a security outfit recently set-up by the Western states, ability to mobilize their forces and deal with situations, faster, even before the IG can pick up his phone in Abuja. In Kano they have the Hisbah, a religious police force that keeps trouble makers at bay by enforcing their Sharia law. ( I may not agree with Sharia law but it works for them)A state governor and his advisors know their state inside out and with their own police force, at their command, can deal with incidents faster and more effectively instead of waiting for the slow chain of command of the IG to act. And if and when they get their own state police forces, they should instil in them discipline and make them aware of the fact they are crime fighters and not bribe collectors ( no more ‘egunje’ or ‘kola’) and cannot act as if they are above the law like the now defunct SARS. And if there are situations whereby the state police can’t cope the Federal Government can then draft in the army to assist just like the National Guard gets drafted in to help state police in America if things get out of hand.

With anarchy rife and the security forces powerless to bring the situation under control we are witnessing the impending implosion of the country into a cesspit of frequent bloody tribal( – and religious) clashes: Fulani herdsmen killing Southerners will soon lead to Southerners killing any Fulani man they come across and we still have ritual cultists, Boko Haram and others killing everybody. And soon it will be a free-for-all with everybody fighting everybody. It won’t be a civil war because there will be too many different factions fighting each other.

And when recruiting police officers the NPF needs to up its standards: current recruitment practices doesn’t screen potential candidates well enough; there are no IQ tests and you have barely literate people signing up; they are not psychologically assessed so it’s not uncommon for a psychopath to be given a gun and a uniform. And when it comes to giving out guns not all offices should be allowed one. It takes years to train a firearms officer so they know how and when to shoot: in Nigeria they probably receive training for a few weeks(- or a few days!) and before you know it they’re out in public shooting anything that moves(bus drivers, yahoo-yahoo boys, market women and innocent bystanders) like they are Rambo! And when the Nigerian police kill anybody indiscriminately( – or extra judicially!) they are not properly disciplined, no compensation is paid to the victims and the matter is quietly swept under the carpet. The whole world was appalled when white cops were killing black people in America leading to the formation of the BLM Movement and reforms within the police force: in Nigeria Lai Mohammed will go on T.V and say the ‘well-trained’ Nigerian police officers only shoot ‘armed’ criminals( – if they are not armed PR videos and pictures will show ‘planted’ guns – and its always the same gun – or guns – in all the pictures!)

So there you have it: to adequately police a 200-million-plus – multi-religious-multi-tribal country like Nigeria a new direction needs to be sought to uphold law and order: the old ways and the NPF in its current inception can’t fight itself out of a paper bag let alone fight crime.

Why A Revolution Will Never Happen In Nigeria
Who Wants To Be A Millionaire?