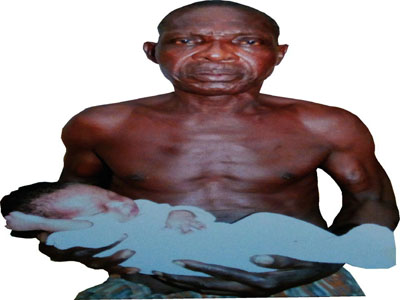 A traditional birth attendant, Yetunde Osin and her father have been arrested for allegedly stealing a 2-month old baby girl from her mother.

35-year-old Yetunde Osin and her father, 65-year-old Jamiu Jimoh were accused of being a part of a child selling syndicate by Police detectives from Igbogbo Police Station in Ikorodu Lagos.

It was learnt that Osin delivered the baby for a 28-year-old woman named Stella on the 9th of November at her home at 4 Kadara street in Oyingbo.

She was said to have told the woman that the child was dead and even showed the mother a dead child.

She then brought the baby to her father in Ikorodu.

After her arrest, Osin disputed the story, saying she found the baby under a bridge near her Oyingbo home.

This is what she told the police:

Her father who lives at 4 Aro street in Ikorodu also denied having knowledge that the baby was stolen.

The mother of the stolen baby is yet to come forward.

Ugandan Man Buried With 5700 US Dollars Meant To Bribe God So As To Make Heaven & Forgive His Sins
Ibinabo Fiberesima To Give Scholarship To 5 Children In 2017, Asks Parent To Submit Application