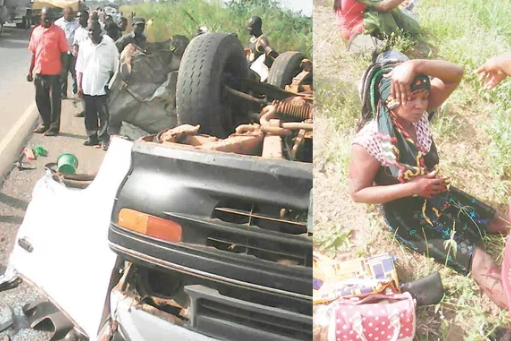 Not less than 19 died on Wednesday on Enugu-Abakaliki Expressway in multiple accidents involving commercial vehicles.  One of the survivors was a staff of The Sun, Prince Ogbonna.

Though the Federal Road Safety Corps (FRSC) could not confirm the number of casualties, one of the survivors of Ezillo accident, who identified himself simply as Ezekiel, told our reporter that the accidents occurred when the driver of a white bus which took off from Awka and heading  to Abakaliki tried to overtake a Sienna bus and rammed into an oncoming bus.

He blamed the driver of the bus he was traveling in for reckless driving, adding that the accident would have been avoided if the driver heeded the warnings from passengers.

Ezekiel said the driver tried to overtake the Sienna when another bus coming from Abakaliki on high speed was approaching, both drivers lost control of their vehicles, there was a head-on collision.

Shortly after the accident, residents of Abakaliki and its environs whose relatives travelled along the Enugu-Onistsha Expressway besieged the accident and emergency unit of the Federal Teaching Hospital where most of them were referred to the mortuary to check for their missing relations.

Meanwhile, all efforts to speak with the Sector Commander of the FRSC Ebonyi State Command, Mr. Sunday Inyama proved abortive as he was said to be in a meeting.

Prophet SK Abiara’s Wife For Burial Dec 2nd, Lying In State & Wake Keep To Hold In Ibadan
Opinion: There Should Be No Escape For Looters & Corrupt Nigerian Politicians