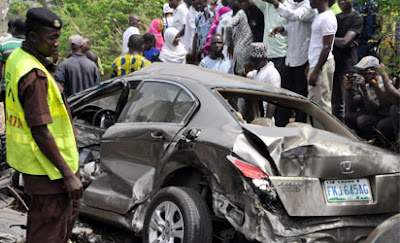 A truck ran over a car and killed two occupants on the Lagos-Ibadan Expressway yesterday.

The victims, who were yet to be identified, were  travelling in a Toyota Camry saloon car with registration number LSD 716 AE  when the truck ran over their car and crushed them to death on Otedola Bridge.

The incident which happened around 6.30pm caused a serious traffic jam on the highway.The driver of the ill-fated truck, with Jigawa number plate: SA 985 BBR, and his conductor were said to have escaped from the scene of the incident immediately it occurred. .

The truck, which was heading towards Ibadan, had a brake failure before it ran over the car killing its two male occupants instantly.

An eyewitness, who simply identified himself as Agbabiaka, said:“I was trekking to Isheri when the truck drove past me. Later I heard a loud bang and when I got closer I discovered that the truck had crushed a Toyota Camry with two occupants”.Traffic policemen from Isheri Police Station and officials of the Lagos State Traffic Management Agency,  LASTMA, later visited the scene to  ensure free flow of traffic.

“The policemen removed the corpses to a mortuary while officials of  the  LASTMA towed the truck and the damaged car to their office in Oshodi,” the eyewitness said