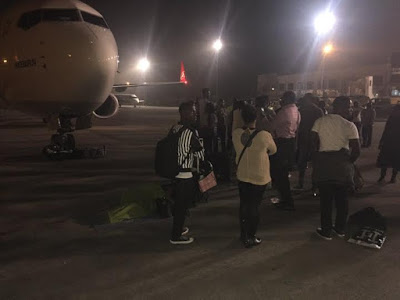 Some Turkish Airlines passengers were a pathetic sight to behold yesterday as many of them turned to beggars and wept over the inhuman treatment given to them by the airline.

Meanwhile, Golden Tulip Festac Hotel, Lagos has accepted back scores of passengers that were supposed to have departed Lagos since Saturday last week after protest from the irate travellers which almost led to the breakdown of law and order at the premises of the sprawling hotel.

The hotel management had on Monday ejected many of the stranded passengers. There were over 410 people who had bought the carrier’s tickets with plans to travel to their destinations from Turkish’s hub in Istanbul. Turkish Airlines, had in a statement on Monday, said: “On behalf of Turkish Airlines Lagos, we regret the inconveniences in the disruption of Lagos to Istanbul flight due to bad weather issue on January 7.

“We hereby advise you to proceed to our Head Office at 1, Adeola Odeku Street, Victoria Island Lagos for a change of your ticket to other available dates or ask for a full refund at your ticket purchase unit. We hope to see you flying with us in the future.”

A passenger, who simply gave his name as Kennedy, said the airline had kept them in the hotel for days without signs that they would fly.

A source said that Turkish Airline officials were embarrassed with the ejection of the passengers, who were expected by international regulations to be accommodated in good hotels if an airline fails to perform its responsibility of carrying already ticketed passengers.

One of the passengers, Michael Okoroafor, told New Telegraph that they now feed from hand to mouth and at the mercy of friends and good Samaritans, claiming that they had exhausted the money had on them.

Continue Reading
You may also like...
Related Topics:lagos, passengers, turkish