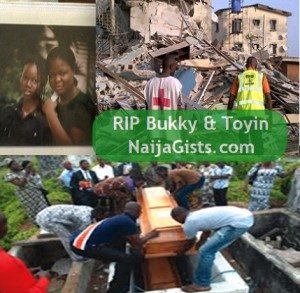 The heart of 68-year-old Mrs. Adebisi was shattered as she watched the remains of her two daughters, Bukky and Toyin Coker, laid to rest at the Ikoyi Cemetery, Lagos yesterday.

The two sisters, Bukky 25, and Toyin, 30 died on November 21 as a wing of their building collapsed at Jakande Low Cost Estate in Isolo, Lagos.

Although their burial service was solemn and short, the tears and wails it stirred went a long way to show that their untimely death was indeed a great loss to the entire family. The duo were the only surviving children of their parents.

Family, friends, neighbours, community and church members gathered at the Ikoyi Cemetery, looking dejected as voice of the officiating pastor, Mr. Prosper Makafui, of the Winners’ Chapel, Oke-Afa, Isolo branch read the rites. “They have gone. No matter what we do right now, no matter what we say, they will not come back,” he said.

The cleric urged the people present to live in perfect alliance with God’s principles, saying that death was inevitable.

“It is appointed for man to die only once, after that, judgement. Death comes only when one leasts expects.

“From what I have heard about these sisters we are laying to rest here today, I have no doubts that God will grant them eternal peace. I heard Toyin’s church members were waiting for her that day she died to come and sweep the church as she usually did.”

Shortly after his heart-renting sermon, the two sisters were lowered in same grave. While Toyin’s body went in first, Bukky’s followed, one atop the other.

Recalling his last encounter with one of the deceased, a young man who simply identified himself as Dele said Bukky was his friend. And unfortunately, he was the last person Bukky spoke with before she died.

According to the still-shocked chap, “I called her briefly about 10 pm that night, but we decided to continue our chat on the BlackBerry messenger.

“We spoke about a lot of things; life, her plan to go for further studies, our future and many other things. But about 10.30 pm, Bukky said she was feeling sleepy and we said our goodbyes.”

Just like two-love birds, Dele said usually, one of them would call the other in the morning to know how the night went.

“Her phone was not available and I kept trying thinking that her phone battery was flat. I was checking something online later when I saw the news,” he said in an emotion laden voice.

When he could no longer control his emotions, Dele broke down in tears.

“They were like their father. He was a very quiet man. I grew up with their father, who was my cousin. I was present when Bukky and Toyin were born. It is really sad, very sad,” he said. (Source: DailyPost)