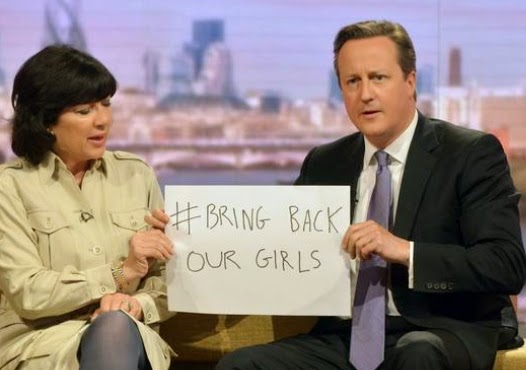 The UK hinted yesterday that it could send troops to Nigeria as part of efforts to rescue the over 200 female pupils abducted by Boko Haram terrorists from their school hostel in Chibok, Borno State last month.

UK PM David Cameron made this known just as Pope Francis prayed for the safe rescue of the girls.

Cameron, who has also joined the growing list of global personalities that have enlisted in the ‘‘Bring Back Our Girls,’’ social media campaign, said while featuring on the British Broadcasting Corporation’s Andrew Marr show, that Britain “will do what we can” to help find the female pupils.”

Fellow guest and Cable News Network Chief International Correspondent, Christiane Amanpour, had handed the Prime Minister the sign and asked if he would like to join the campaign.

Taking it from her, he replied, “Happily.” He later tweeted, “Proud to support ‘BringBackOurGirls.’

He also told the BBC One programme that he “ rang the Nigerian President(Dr. Goodluck Jonathan) to offer anything that would be helpful” in locating and freeing the girls.

Cameron added, “We agreed to send out a team that includes some counter-terrorism and intelligence experts to work alongside the bigger American team that’s going out there(Nigeria).

“We stand ready to do anything more than the Nigerians would want.”

He said it was unlikely Nigeria would ask for British troops to help but stated, “I said to President Jonathan where we can help, please ask, and we will see what we can do.”

Cameron also spoke of the importance of tackling extremism around the world.

“Also, let’s be frank, here in the UK, there is still too much support for extremism that we have to tackle, whether it’s in schools or colleges or universities or wherever.”

He recognised that it was not an easy task to locate and rescue the girls.

The Prime Minister said, “We can’t just pile in and do whatever we’d like. “It’s immensely complicated because they are probably in this deep area of a jungle that is three times the size of Wales.

“But it’s good that efforts are being stepped up and we’ll do what we can.”

The British Foreign Office believes there are “large information gaps” because of the scale and nature of the incident.

“The priority for the team in the first instance is establishing the facts such as the precise identities of those taken and what has actually happened to help Nigeria build a better picture,” an unnamed spokesman for the office said.