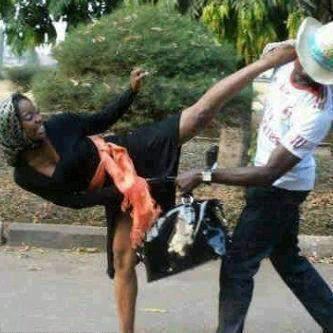 A woman has beat her husband to death in Kaduna for coming home late.

According to the first son of the deceased (Kefas Lucas), 40-year-old Mary Lucas beat her hubby to death on Saturday around 3am in the Gonin Gora area of Chikun LGA of Kaduna.

This is what Kefas Lucas told police about the murder;

“I heard my father shouting around 3am that day (Saturday) and so I called on my mother to inquire what was happening.

“My mother shouted back at me from her room to keep off and remain quiet that armed robbers were operating. The more I tried to get closer to my father’s room, the more my mother screamed thieves! thieves! thieves!

“When I finally summoned up courage to enter my father’s room, I found him vomiting blood and he could no longer talk while my mother was still pretending that it was armed robbers that attacked him.

“There was a heavy object by his side and he was bleeding profusely from his forehead. At daybreak, neighbours came around to help and the police outpost at Gonin Gora arrested my mother and took her to Sabon Tasha Police station.”