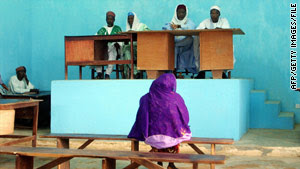 Agochi is standing trial on a two-count charge of criminal force and theft.
The police prosecutor, Sgt. Stephen Kwaza, told the court that Doris Agochi of State House Quarters Mararaba, reported the matter at the Sani Abacha Road Police Station, Mararaba.
Kwaza said that on Feb. 17 at about 6:00 p.m., the accused who is her husband, came to her house at the above address, beat her up and stole her phone valued at N15, 000.

The prosecutor said the offences contravened sections 265 and 288 of the Penal Code.
The accused, however, pleaded not guilty to the charges.

The presiding judge, Mr Vincent Gwehemba, granted bail to the accused in the sum of N50, 000 and one surety in like sum.

He said that the surety must reside within the jurisdiction of the court and must present one passport photograph or a National Identity Card.
Gwehemba adjourned the case to June 6 for further hearing.

Continue Reading
You may also like...
Related Topics:abuja, husband, wife