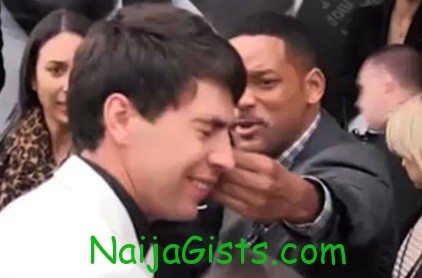 Hollywood movie actor, Will Smith today slaps an Ukrainian reporter who tried to kiss him in Moscow during the premiere of Men in Black 3.

Apparently, Mr Smith was carried away when the journalist made a friendly gesture of hugging him however, the actor became aware the reporter is trying to kiss him.

In the video below, he first pushed away the journalist before slapping him across the face with the back of his hand, asking, “What the hell is your problem, man?”

Will Smith Slaps Reporter Who Tried To Kiss Him in Moscow

Smart move Will @ least you get an opportunity to showcase your Men in Black acquired skills.

What would you do if you were in Will Smith position?

My Husband Is Not Romantic – Nigerian Actress Anita Hogan
Wonders Shall Never End!