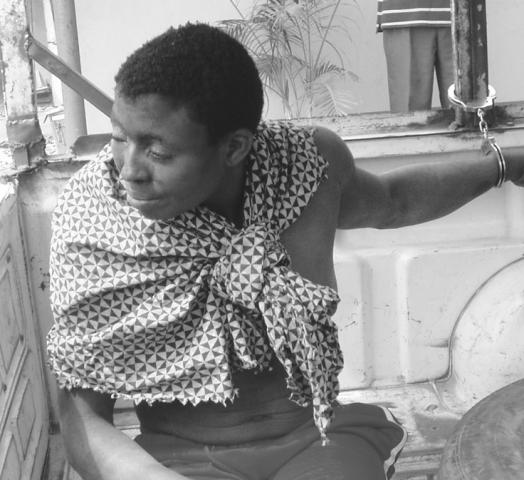 A Lagos based house maid named Joice made a shocking confession of how she inflict serious damage and pain on an innocent family with her demonic powers.

Joice The Witch Hired As An House Maid

41 year old Joice was hired as an house help by a couple in Lagos State Nigeria.

The couple are well known spiritualists yet Joice still succeeded in unleashing her witchcraft terror without being noticed.

Before John and wife could put their ‘powers’ together to discover the tormentor right inside their home, damage and pain had been done for than two months.

Joice last week confessed to possessing two female spirits whose names are Monica and Sophia, that she used to bewitch her employer’s family and feeding the family with human feaces while she gave her spirits the family food spiritually.

“When I arrived here, I came with my two female spirits (Monica and Sophia) hidden in my bag. My paternal grandmother gave me the spirits when I was about two years old and she also made tattoo marks on my body to initiate me into witchcraft.

My grandmother later killed her daughter-in-law using witchcraft and her avenging spirit in turn killed her. Now my grandmother’s spirit possesses me and sends me to do all sorts of evil things. Even the female spirits are now terrorizing me, making me do things that I’m ashamed of. At times I just find myself naked and outside at night,” revealed Joice.

She also said upon sensing danger, the spirits moved back to her home town before Johns and his family came to realize what had hit them.

“The female spirits asked me to take them back home and I took them there at night two days ago. I flew in a weaving basket!” claimed Joice ‘the pilot’.

“I practiced all sorts of witchcraft on this family. I touched the father’s private parts and made him weak in bed. I also wanted his wife to die while giving birth, but she survived, so I caused her Caesarean operation not to heal. I also took hair from her head and made it not grow anymore. I just envied her hair and so I took it,” she said

Joice also confessed that she unleashed a lot of harm and pain amongst the family’s children.

“I put a spell on the eldest child so that he would just wander aimlessly and have problems with his father. For the other child, I wanted her to die in her sleep, but I failed. I also wanted the other girl to have headaches and I also gave her evil food to initiate her into witchcraft.

As for the youngest child (4 years old), I gave him a piece of bread so that he would never want to drink tea and bread again and I would also take him with me for my escapades. I tried to kill him but I failed,” narrated Joice.

The woman also revealed that she bewitched the baby to make her blind.

“I put pepper and methylated spirit into the baby’s eyes so that she would become blind. I also cast avenging spirit in this house so that she would stop haunting me and I put a spell so that my employer’s work (spiritualist) would fail. Since my arrival, people stopped coming here for help. My grandmother is the one who was instructing me to do all these things,” claimed Joice.

All the family members confirmed the misfortune that befell them and by the time of going to press, the baby was yet to get her sight back as Joice had said her sight would be restored after five days.

Joice also explained how she would feed her evil spirits.

“They also drank tea, at times when I was cooking, the tea would suddenly spill on the ground. They only drank blood once in a while. I would then feed this family with human waste,” she said.

When asked why as spiritual healers, John and his wife failed to ‘sniff’ out Joice’s evilness, John said they were constantly traveling to different places in the country, helping people and it was when they came back home and settled that they noticed the evil that was pervading in their home.

Joice was eventually dismissed from the couples home and was warned that if ever anything bad again happens she would be taken to task.

Continue Reading
You may also like...
Related Topics:nigeria, witchraft confession