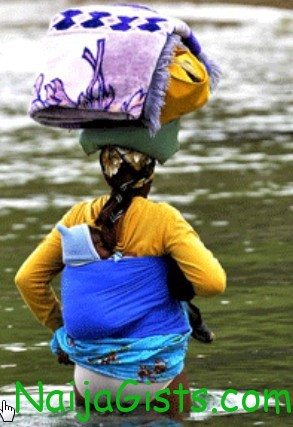 This sad episode took place in Benue state when a woman by the name of Idenyi Abbah residing at Anumajogwu, in Ogbadibo Local Government Area made a shocking confession of the mystery surrounding the death of her only daughter, 8-year-old daughter, Enyanwu, because she wanted more children.

Currently held at the Ukwo Police Station in Benue State, Abbah, who had one child for her husband, said she became envious when he married a second wife in a quest for more children. She then consulted a juju priest at Ikem in Anambra State, who allegedly asked her to sacrifice her only daughter to the Awube goddess.

“I have been to every part of the country, searching for pastors and native doctors that could help me out of this problem, but have been told almost the same story, that my only daughter was ‘ogbanje’ (witch) and had blocked my womb,” she said. “I had tried to avoid the solution I got from one native doctor at Ikem; until my husband opted for another wife. This move had forced me to do the wish of the gods by killing Enyanwu.”

At the venue of the sacrifice, near the Awube River, around midnight, the said juju priest allegedly arranged for some young men who gang-raped Enyanwu before sacrificing her to the said goddess, while her mother watched.

A resident of the area, who gave his name as Okpe, claimed to have witnessed the murder from a hideout while he was hunting at night; adding that he was powerless to stop the killing because the young men were armed. “They put their knives through her neck after the mother had said some incantation,” he said. “They also raped her before that.”

Okpe said he fled the scene and reported the matter to the village head, who then alerted the police. When police officers and residents of the community stormed the scene of the murder, nobody was found and a search revealed Enyanwu’s mutilated corpse in a shallow grave near the river.

Police authorities in the state say a manhunt has been launched for the murderers and that Abbah will soon be charged to court.

“There is nothing more costly and dangerous than pure ignorance“