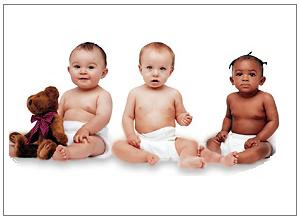 According to a report from the daily mail uk, the world’s first set of genetically modified human babies have been created in the us.

Thirty healthy babies were born in the United States after series of test and experiments. These experiments have sparked anger and debate about ethics.

As at now, 2 of the 30 babies have been tested and have been found to contain genes from 3 ‘parents’ while 15 of them were born as a result of an experimental programme at the Institute for Reproductive Medicine and Science of St Barnabas in New Jersey.

The babies were born to women who had problems conceiving. Extra genes from a female donor were inserted into their eggs before they were fertilised in an attempt to enable them to conceive.

Genetic fingerprint tests on two one-year- old children confirm that they have inherited DNA from three adults –two women and one man.

The fact that the children have inherited the extra genes and incorporated them into their ‘germline’ means that they will, in turn, be able to pass them on to their own offspring.

Altering the human germline – in effect tinkering with the very make-up of our species – is a technique shunned by the vast majority of the world’s scientists.

Geneticists fear that one day this method could be used to create new races of humans with extra, desired characteristics such as strength or high intelligence.

Writing in the journal Human Reproduction, the researchers, led by fertility pioneer Professor Jacques Cohen, say that this ‘is the first case of human germline genetic modification resulting in normal healthy children’.
Some experts severely criticised the experiments.

Lord Winston, of the Hammersmith Hospital in West London, told the BBC yesterday: ‘Regarding the treat-ment of the infertile, there is no evidence that this technique is worth doing . . . I am very surprised that it was even carried out at this stage. It would certainly not be allowed in Britain.’

John Smeaton, national director of the Society for the Protection of Unborn Children, said: ‘One has tremendous sympathy for couples who suffer infertility problems. But this seems to be a further illustration of the fact that the whole process of in vitro fertilisation as a means of conceiving babies leads to babies being regarded as objects on a production line.

‘It is a further and very worrying step down the wrong road for humanity.’ Professor Cohen and his colleagues diagnosed that the women were infertile because they had defects in tiny structures in their egg cells, called mitochondria.

They took eggs from donors and, using a fine needle, sucked some of the internal material – containing ‘healthy’ mitochondria – and injected it into eggs from the women wanting to conceive.
Because mitochondria contain genes, the babies resulting from the treatment have inherited DNA from both women. These genes can now be passed down the germline along the maternal line.

A spokesman for the Human Fertilisation and Embryology Authority (HFEA), which regulates ‘assisted reproduction’ technology in Britain, said that it would not license the technique here because it involved altering the germline.

Jacques Cohen is regarded as a brilliant but controversial scientist who has pushed the boundaries of assisted reproduction technologies.

He developed a technique which allows infertile men to have their own children, by injecting Fluid DNA straight into the egg in the lab.

Prior to this, only infertile women were able to conceive using IVF. Last year, Professor Cohen said that his expertise would allow him to clone children –a prospect treated with horror by the mainstream scientific community.

‘It would be an afternoon’s work for one of my students,’ he said, adding that he had been approached by ‘at least three’ individuals wishing to create a cloned child, but had turned down their requests. (dailymail uk)