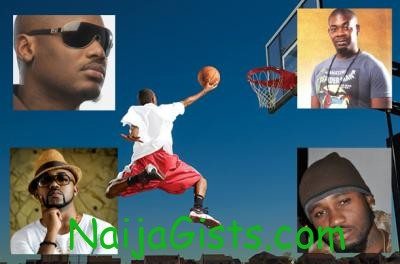 This community development basketball and music event featuring 2face, MI, Vector, Sauce Kid and Banky W has been tagged ‘Living with Care, Dunk with Care’, is scheduled to hold on Sunday, April 15, 2012 at the Harbour Point, Victoria Island and would feature a basketball game between a select team of the celebrities and national basketball league side, Dodan Warriors

According to the organisers of the event, Play Centre Limited, other artistes expected to play for the Celebrity Team include Tiwa Savage, Darey, Davido, Dr. Sid, Wizkid, Ice prince, Naeto C, Wande Coal and Sound Sultan. Others are Iyanya, May D, Toolz, Ikechukwu, eLDee, Evam Lynxxx, Chidinma, Skales, Sexy Steel and RapChef. The coaches for the All-Star team are DJ Jimmy Jatt, Bobby Boulders and Don Jazzy. Olayunde Michaels, producer of the event, says that the event was created “as a creative blend of basketball, music, community development and all round entertainment“.