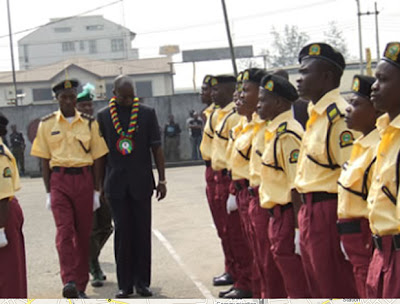 Governor Babatunde Fashola of Lagos State has ordered officials of the Lagos State Traffic Management Authority, LASTMA, to begin the arrest of any motorist who refuses to stop at a Zebra Crossing for pedestrians to cross.

The governor gave this order on Thursday at the finals of the 2012 Be Road Friendly (BRF) Competition, which was organised by the state Ministry of Transportation at the Government Secretariat, Lagos, southwest Nigeria.

The governor said he was disappointed that motorists violated the zebra crossing law with impunity without waiting for the pedestrian which had the right of way to cross at a zebra crossing.

He asked the pupils, students and others present at the event to vote if they wanted zebra crossing and they responded in the affirmative.

Fashola then ordered the General Manager, LASTMA, to begin enforcement of rules on zebra crossing violation across the state immediately, saying that people must learn to stop for pupils and people crossing at a zebra crossing as they had the right of way.

“You will not see traffic congestion in Somalia, but in London, New York, Paris and even in Manhattan where even the feet is faster than vehicular movement. There it is bumper to bumper. The truth is that there is a period called rush hour in every major city of the world and Lagos will not be an exception.

“It is that hour and period when our children are going to school, parents are going to work and traders are going to the market. So if you are not in any of the three categories, what are you doing on the road at that period?

“The highways are not personal highways but shared assets. We must use them one after the other. If we all get on the road there would be traffic. We are sharing a common asset. Our responsibility is to manage it for the common good of all,” he said.

Commissioner for Transportation, Mr Kayode Opeifa, said since 2008, Lagos State had adopted the School Traffic Safety Advocacy Programme, two years ahead of the United Nations declaration in 2010 of traffic education and road safety education to the next generation which are children.

Opeifa said the feelers the ministry is getting from various non-governmental organisations in the transportation industry is that accidents are fast reducing, adding that the ministry is planning to carry out a review of the entire road transportation law in the state with special focus on children and the physically challenged.

Meanwhile, winners have emerged in the BRF competition after a keen contest. The winners include Miss Abimbola Thompson from Model College, Igbokuta, who emerged first in the senior secondary school category, followed by Master Sonaike Adejumo and Eliza Ewudiwa who were first and second runners up respectively.