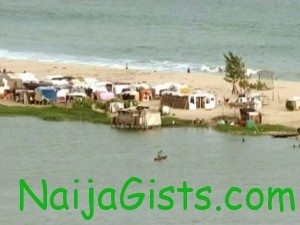 Following a 7 day of strong wave accompanied by powerful ocean surge in Lagos, the Lagos state Government is hereby ordering the immediate evacuation of the following beach communities

Prince Segun Oniru, Lagos State Commissioner for Waterfront Infrastructure Development, who announced this government’s order said the process has started with the immediate evacuation of the Kuramo Beach to make way for movement of sand into the area.

He said this action has to e taken to avert further disaster of the Atlantic joining the Kuramo Waters and subsequently the Lagoon.

The Commissioner who explained that the State is getting the extreme of this weather condition due to the location of Lagos State, noted that other Coastal waterfront areas badly affected from which people would be expected to move include Badagry and Ojo Waterfront areas, Bar Beach, Kuramo Beach, Goshen Estate, Maiyegun and Alpha Beach.

He added that the State emergency services have already been mobilized to continue to monitor the situation and respond accordingly. He urged everyone to remain calm.