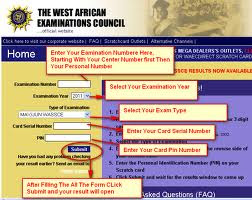 The Deputy Director, Public Affairs of the council, Mr Yusuf Ari, in an interview with the News Agency of Nigeria (NAN) in Lagos, described the rumours as “wicked and misleading.”

Ari said the council had received information that some individuals were trying to deceive the public by posting fraudulent information on-line concerning the results.

He said some of the fraudsters even went as far as urging innocent individuals to buy scratch cards to access the results.

According to him, “there is absolutely nothing like that from our council. We are surprised about this information because we have been receiving calls concerning the said release of results.

“We have barely finished our examination. We have just concluded marking the examination scripts in some states, while waiting on others largely due to security challenges in the country.

“Going by our tradition, WAEC has never released the result of this particular examination in July.”

Ari stated that there was no way the result of the examinations that commenced in April across the country and concluded on May 17, would be released in July.

“The policy officially is that results must be released 90 days after the last paper is taken and in the recent past, we had been releasing results of this examination well ahead of schedule.

“There is no way that the release of results of examination of this magnitude could be made without an elaborate news briefing by the head of national office,” Ari stated.

The deputy director said that members of the test body were currently working hard to ensure that they meet the target set for the release of the results.

Ari pleaded with candidates and other stakeholders to shun the deceit and not to allow themselves to be misguided by such wicked and baseless rumours.