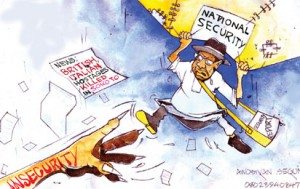 From the deep cave in Anambra where the Movement for the Actualisation of the Sovereign  State of Biafra (MASSOB) operates to the creek in the Niger Delta which parades dozens of militant groups battling for resource control, down to the West where the Odua Peoples Congress holds sway up to the savannah in the north that has recently witnessed the insurgence of the Boko Haram group all at one time or the other holds  the Nigerian government in arms-lock.

Dr. Frederick Fasehun puts it better when he observed that “Nigeria has passed through the milestone of a   devastating civil war, through the paralyzing June 12 crisis, the unprofitable Niger Delta crisis and now, the blazing Boko Haram insurgency. And so shall this country continue to move from one minefield of crisis to another.”

The Nigerian society has become a system of states competing with one another, all in a bid to grab what belongs to all. This intense competition results in conflict. As the tempest rages, various ethnic groups that make up the Nigerian nation continue to lay conflicting claims to the centre which has failed to hold.

Consequently, the nation has witnessed series of ethnic crisis all bothering on mistrust, tension, hatred and hostility. The military destruction of Odi in November 1999 just few months after the inauguration of civil rule was a clear manifestation that beyond Nigeria’s democratic veil is authoritarianism.

While defending the invasion of Benue State in 2011, General Victor Malu’s home area, the then General Alexander Ogomudia said, “the general’s area even right to the boundary  with Cameroun along River Katsina Ala is fully charged. The greatest number of ex-service men in this area are concentrated in that area. They did not capture those soldiers with bows and arrows or with bare arms.”

Also, the unprecedented carnage perpetrated by the militant groups in the Niger Delta who until recently embraced the amnesty programme is still very fresh in the memory.

According to General Ogomudia, some stupendously rich generals are believed to be behind of most violence. There are those of them who instigate violence either because the people they have sponsored are not playing or dancing to their tune.

Until recently, local groups put on ethnic armour to resist political marginalisation as other ethnic militias carried the shield of hatred to quench the burning arrows of political manipulation.

On daily basis, the activities of the Boko Haram and its attendant effects are unquantifiable. The reports on the activities in national newspapers show that lives are lost, buildings destroyed and businesses paralysed.

Consequent upon the surging waving endless destruction of infrastructures, the Senate recently implored the federal government to raise special courts for terrorism crimes if the activities of the Boko Haram sect that have been engaging in bombings leading to massive loss of lives and wanton destruction of property must end.

Also, disturbed by the level of insecurity in parts of the country caused by the Boko Haram sect, the 36 States governors under the aegis of the Nigerian Governors’ Forum (NGF) insisted on the establishment of State police.

According to them, establishment of state police remains the only strategy in putting to check the rising insecurity in the country.

The governors also called on the federal government to establish special intervention fund for state governments that are particularly affected by the Boko Haram activities.

Also, as panacea out of the insecurity crisis, most Nigerians have canvassed for national conference. Many militancy groups believe that the Nigerian project cannot be built on unfairness and are therefore asking for reflections and negotiation on it.

Kidnapping and armed robbery In Nigeria

On daily basis, reports of kidnapping and armed robbery have become a reoccurring decimal. The incidence of kidnapping is more prevalent in the East and Niger Delta area.

Only recently, the cousin of Delta State governor, Emmanuel Uduaghan was adopted by unknown men. In Rivers State, cases of kidnapping abound. In the Eastern states, stories of kidnap are reported on daily basis.

Just last year, over 50 persons were feared killed in a gory robbery operations in Kogi State. Most of the victims were said to be travelling from Lagos  to Abuja when their bus was stopped by armed robbers who ordered them out and asked them to lie face down on the express road. Unsuspecting oncoming vehicles rammed into them, leaving behind mangled flesh and broken skulls. Only 14 bodies were recovered as it was impossible to  gather  the other  bodies.

In Edo, Ogun, Delta and Rivers states, bank robbery are reported on daily basis. In all of these operations, many were reported dead