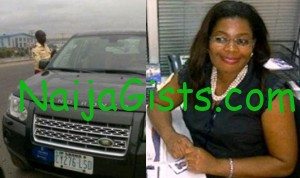 A Lagos based IBTC Banker, Yinka Johnson who was accused of killing a LASTMA Officer has been released from Police detention. naijagists.com

After a thorough investigation on the accident scene yesterday, she has been freed.

However, she was charged with reckless driving and ordered to pay a fine.

Her case has been adjourned to September 3rd, 2012.

A big thanks to people who read our news and testified on her behalf.