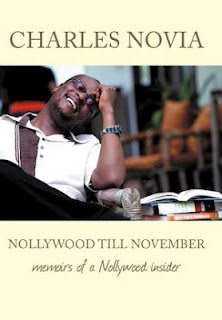 Nollywood Till November is a memoirs written by talented movie producer Charles Novia who has produced several interesting Nollywood movies.

In this memoirs, Charles revealed some hidden secrets about top Nollywood actresses like Genevieve Nnaji, Stella Damasus, Omotola Jalade amongst others.

He narrated the minor rift he had with Omotola Jalade Ekeinde and how he caught Genevieve Nnaji smoking in a dark room and so on.

Nollywood is the general moniker for Nigeria’s exciting and thriving film industry! Behind its world-wide acclaim as an independent filming success story is an oft-ignored back story; the pains, push and perseverance of the major film-makers in the business. ‘

Nollywood till November’ tells the insightful and exciting true story of Charles Novia, from his trudging days as a struggling film maker in the then cabal-styled Nollywood, to his eventual triumph And success as a major force in Africa’s biggest film industry! Novia’s memoirs reveal a personal perspective of the monumental struggles each of the now-famous personalities in Nollywood must have faced on their road to fame. It is a brilliant and inspiring tale of succeeding against the odds in an industry that has been termed ‘the third largest film industry in the world’

Nollywood Till November has been released and it’s available for sale on Amazon and Kindle.

To purchase this inspirational story book, click the link below

You can purchase the downloadable Kindle version below