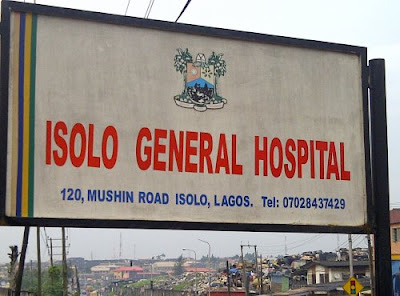 The Lagos State Government has shut down the Isolo General Hospital Mortuary to allow for reconstruction of the morgue.

The closure of the mortuary takes effect from tomorrow (Tuesday), while the government has asked members of the public whose loved ones are in the mortuary to evacuate them immediately before the closure.

There has been complaint by the public of serious stench emanating from the mortuary in Isolo area of Lagos, Southwest Nigeria.

Commissioner for Health, Dr. Jide Idris said the closure of the mortuary is in conformity to public health norms.

The Commissioner however noted that the recently renovated Mortuary in Mainland General Hospital has now been designated a Social Responsibility Centre and that as such, it would henceforth receive and accommodate only some categories of dead bodies.

“The Mainland General Hospital mortuary will receive and accommodate only the following categories of bodies: bodies in respect of which a Coroner has directed an autopsy to be conducted, pursuant to the Coroners’ System Law, 2007, including bodies found on the State’s roads and highways or which have been picked up by the Lagos State Environmental Health Monitoring Unit (SEHMU), bodies of individuals who died while in custody or shortly thereafter and bodies which have been abandoned in other State mortuaries,” Idris explained.

He reiterated government’s commitment to continue to serve the people while striving to improve social amenities, health outcomes and quality of life of the people of the state. (PM news)