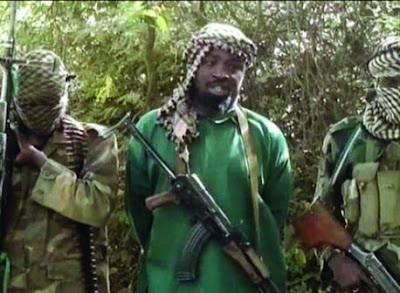 A man accused of being an informant has been beheaded by Islamist group Boko Haram.

The incident was recorded in a video obtained Tuesday in which the victim accused of being an informant appears to be beheaded on camera.

Suspected leader of the group, Abubakar Shekau, denies any ceasefire deal with the government and also makes no mention of kidnappings in the video, including last month’s abduction of seven members of a French family in neighbouring Cameroon that was blamed on his group.

It was not clear when or where the video was made. The clip has been distributed to Nigerian journalists in the country’s north in recent days through intermediaries

Sources familiar with Boko Haram say it was handed out in this manner because Nigerian authorities have been blocking the group’s videos from being uploaded to YouTube.

AFP could not verify the authenticity of the video but the man speaking closely resembles a person identified in previous clips as Shekau.

There are two separate parts to the video: one of Shekau speaking and another of the apparent beheading. Shekau cannot be seen in the second part.

The video is in part a response to a man claiming to be a Boko Haram commander who has appeared in public several times in recent months calling for dialogue and declaring a ceasefire.

There has been deep suspicion over whether the man calling for the ceasefire has truly represented Boko Haram.

“We have never made a truce with anybody, and no one represented us in any dialogue,” Shekau, wearing a knee-length green caftan and with an AK-47 dangling from his neck, says in the video, which is about 10 minutes long.

Speaking in the Hausa language common throughout northern Nigeria, he names the man who made the ceasefire claim, Sheikh Muhammed Abdulazeez Ibn Idris, and promises punishment for those who falsely represent the group.

“We have not entered into dialogue with anyone,” he says. “Which kind of dialogue, for God’s sake, when day and night our brothers are being arrested, imprisoned, including women and children?”

Shekau is flanked by six men holding weapons with their faces covered by headscarves, standing outdoors in an unknown location.

After he finishes speaking, the video cuts to another clip that shows a man with his hands and legs bound. A group of men pin him to
the ground, while one appears to slit his throat.

They later appear to behead the victim, who is labelled an informant who provided information to the military. Shekau cannot be seen in the clip of the apparent killing and beheading.

Violence linked to Boko Haram’s insurgency in northern and central Nigeria has led to the deaths of some 3,000 people since 2009, including killings by the security forces.

A video that emerged on YouTube on February 25 showed the kidnapped French family as well as their abductors, who claimed to be from Boko Haram, though the video was significantly different from past footage attributed to the group.

Boko Haram had never before claimed responsibility for a kidnapping, though a splinter faction of the group, known as Ansaru, has appeared to focus on abducting foreigners in recent months.

The group is believed to have a number of factions with varying aims.

One thought on “Boko Haram Informant Beheaded In Live Video – Picture Of Shekau, Their Leader Caught”