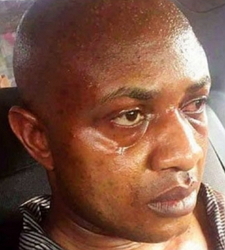 Thanks for visiting NaijaGists.com crime watch, I believe you are here looking for the whereabouts of kidnap kingpin Evans.

As at Monday the 7th of May 2018, the kidnap kingpin is still at Kirikiri Maximum Security Prison in Apapa Lagos.

On the 30th of August 2017, the kidnap gang leader was kept there following plans that he tried to escape and since then, he has remained behind bars.

Though he appeared briefly in court on the aforementioned date, he has since returned to his temporary abode until the completion of his trial.

Keep in touch with NaijaGists.com for timely update on Evans case and breaking news in Nigeria.