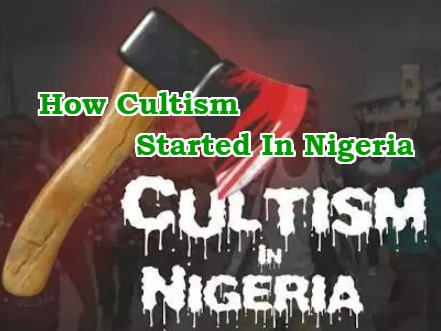 In Nigeria and most parts of the world the term cult/cultism is viewed in a negative light as the various displays of known cult in the present society does not speak well of this group of people. The mere mention of the name brings negative thoughts and descriptions to mind. Confraternities and its likes have led to the loss of several lives in the most gruesome manners. The presence of these groups is definitely something the environment can do without, as it does not seem to make any tangible positive addition to society.

How Did Cultism Start In Nigeria: Who Is Founder of Eiye & Black Axe Confraternity

The term cult is of a religious origin it is used to collectively describe a category of people who come together to form a group, they share the same thoughts and ideology with regards to a particular topic it could be philosophical, religious or social. They function like an organization and usually have a mapped out goal in mind. Most cult groups in Nigeria are referred to as confraternities. 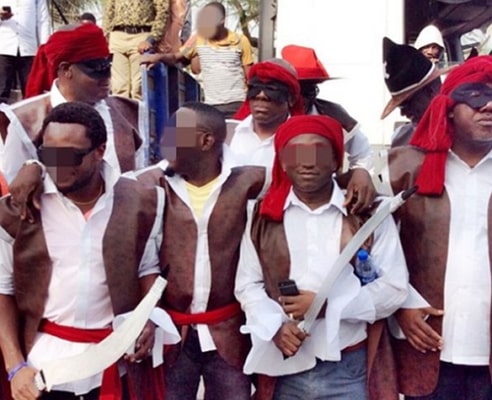 Most of these organizations usually participate in society development projects and charitable giving. Being accepted into these sororities is considered an honor which often comes with great benefits. Belonging to these organizations gives an individual a head way in their careers and other aspirations after graduation. Membership to these groups is usually for life. These bodies have managed to run smoothly and maintain their original aims and objectives. As with most things in Nigeria this borrowed idea has also been greatly abused.

How Did Cultism Start In Nigeria

In Nigeria confraternities are out rightly called secret cults. It is populated by Nigerian youths most of which are students of various educational institutions. Belonging to confraternity has become a medium of acquiring power and prestige. Cultism has been so abused in the Nigerian society that at the moment, we have children of primary and secondary schools who are supposedly members of one cult group or the other. These confraternities usually get and recruit new members at the beginning of an academic session. Fresh University students are usually warned against willingly joining these organizations.

This group was started by seven students: Raph Opara, Ikhehare Aig-Imokhuede, Olumuyiwa Awe, Pius Oleghe, Sylvanus Egbuchie, Nathaniel Oyeola and Wole Soyinka. They adopted a motto which says against all conventions. The pyrates confraternity was reportedly started as a reaction to the treatment of discrimination given to the less privileged students of the University by the privilege students.

At the time, the University was populated by wealthy students who were affiliated with the colonials and this created a problem for the poorer students as they were in a constant battle to fit into their environment; Hence the creation of the Pyrates Confraternity.

Their leader was referred to as Capon Blood. The symbol of this group was that of a human skull, an anchor and two crossed bones. One of the criteria for membership was a superior academic and intellectual mind. This condition was taken serious as it was reportedly one of the things, which led to the breaking away of some members of the Pyrates to form another confraternity they called the National Association of Sea Lords. The confraternity in general was a mirror of its mother cult.

The pyrates use languages and sayings like: No Friend No Foe, Absolutely No Lagging, Odas is Odas. It was the only cult in existence for quite a number of years before others were created. Other cult groups like the Buccaneers, Supreme Eiye Confraternity, Black Axe and the likes came into existence much later.

When Was Supreme Eiye Confraternity Founded

The Supreme Eiye confraternity was reportedly formed in 1965 in University of Ibadan by a group of students some of which include: Tunde Aluko, Goke Adedeji, Bayo Adenubi, Dele Nwakpele, Bode Fadase, Kayode Oke and Bode Sowunmi. At inception it was called the Eiye group but later became the Supreme Eiye Confraternity as time went on.

This confraternity is also referred to as the National Association of Air Lords. It was started with the aim of bringing about development physically, culturally, socio-politically and mentally to its members and was supposedly not concerned about other cult groups in existence as at the time.

Their symbol is a human skull with two crossed bones beneath it. Members of this cult are also called Air Lords, Air force, fliers and the likes. Their belief system is that of brotherhood, discipline, secrecy, Autocracy, No Friend No Foe.

What is the Black Axe Confraternity?

The black Axe confraternity was founded in 1976 in the University of Benin, by students who were believed to be foreigners supposedly a group of runaways from a South African Organization that stood against apartheid. They were all about building an organization for the defense of oppressed black students.

Members refer to each other as: axe men, amigos or wise men, members who have graduated are called lords. They use slangs like: bamming in reference to initiation ceremonies, ju for uninitiated individuals and words like injew to refer to members of another confraternity.

This cult has a set of colors which are as follows: black, white and yellow. Black is associated with their affiliation with the black race, white is said to represent peace and purity while yellow represents intellect. Usually, the combination of these colors take the form of members wearing black trousers paired with a white shirt and a touch of yellow mostly represented by a cap, tie or ribbon.

The Black Axe and the Supreme Eiye confraternities are presently viewed as arch enemies; although when this enmity began and the circumstances which led to it are not public knowledge. The black Axe members refer to members of the Eiye confraternity as Tingo or Birds.

Cultism and Its Place in the Nigerian Society

Most cults are known to be injurious and are feared by members of the Nigerian society. The Supreme Eiye Confraternity and the Black Axe are considered highly dangerous as they not only carry around harmful weapons but also have been known to be behind lots of deaths in the bid to make one form of statement or the other. Members of these groups are mostly individuals from less privileged backgrounds. They are often used by shady individuals as assassins and political tugs. Their finances are mostly gotten from these types of services they render.

The female confraternities are no better than the male cults, they are arguably much worse. Female confraternities do not stand on their own usually they fall under one male confraternity. They are put through dehumanizing experiences which they term as initiations and they go on from there to become glorified ladies of ill repute. They act as spies and watch dogs for their male superiors and go as far as trading their bodies to get the job done.

These cultists have moved beyond a medium of defense and protection of the innocent as most of them were set up to be. The now comes off as blood thirsty and power hungry organizations that make no concrete addition to society. Cult groups have unarguably become a menace to society as many of them are considered to be criminals wanted by the police force. Even Universities have been known to out rightly expel students who are members of cults, whenever they are found out.

The positive influence of these cults to society is yet to be seen. Initiation ceremonies are an unpleasant affair as it takes the form of violence and bloodshed, membership is no different. These confraternities have no one else’s interest at heart except their own, making them a rather selfish group. They have obviously become outfits for the perpetration of mindless violent acts they have obviously lost the purpose for which they were originally created and should therefore be kicked out of society.