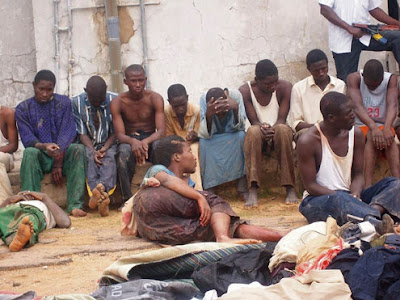 The Nigerian military said Wednesday that it has arrested eight of the suspected insurgents who launched deadly attacks since the weekend in the northeast in which more than a dozen students were killed.

“Eight of the terrorists who perpetrated the mayhem during the weekend have been apprehended at the outskirt of Maiduguri,” the spokesman of the defence headquarters, Brigadier General Chris Olukolade, said in a statement.

The insurgents attacked two schools in the northeast this week, leaving at least 16 students and two teachers dead.

On Monday in Maiduguri, the capital of Borno state, suspected Islamists shot dead nine students as they sat an exam in a private school. Two of the attackers were also killed, the army said.

Boko Haram, whose name roughly translates as “Western education is sin,” has carried out multiple attacks on schools in northeast Nigeria.

The statement said the insurgents’ recent attack “on soft targets” was a way of seeking attention and acts of desperation.

It said that special forces have boosted mop up, cordon and search operations to ensure an end to the insurgency in those affected states.

The military earlier Wednesday banned the use of satellite phones in much of the restive region after cutting mobile phone service, further isolating the area.

The military claimed that the sect had used satellite phones to plan attacks on schools.

It was unclear whether the ban would also apply to journalists, who have used satellite phones to communicate when visiting the region, where the military launched a sweeping offensive on May 15. Mohammed Saleh, a relative of one of the deceased students, said school officials had told him that the attack happened soon after the end-of-year exam had started.

“Nine of the students died instantly,” he said, blaming members of Boko Haram.

David Buba, a student at the school who was on the premises when the attack happened, told AFP he had lost a friend in the attack.

“I was within the school premises on Monday afternoon when I started hearing gunshots,” he said.

“I initially thought it was outside the school but when I saw people running, I was confused and hid somewhere in fear until 30 minutes later when corpses of our students were brought out of the exam hall.” In May, the army launched a major offensive against the group in Nigeria’s three northeastern states: Borno, Yobe and Adamawa, and imposed a state of emergency.

In an audio message obtained by AFP on Tuesday, Abu Zinnira, who claimed to speak for Boko Haram, accused the youth of Maiduguri and Yobe of collaborating with the authorities.

“We hereby declare an all-out war on you because you have formed an alliance with the Nigerian military and police to fight our brethren,” he said.

Speaking in Hausa, the most common language in northern Nigeria, he added: “We call on any parent that values the life of his son to stop him from exposing our members otherwise he is dead.”

A statement issued on Monday by army spokesman Brigadier General Chris Olukolade praised the initiative of some local people, “…particularly youths organised into vigilante groups to join the efforts to fish out the terrorists within their communities”.

At least 9,000 Nigerians, mainly women and children, have fled the recent army operation to neighbouring countries, mainly Niger and Cameroon, the UN refugee agency said Tuesday. In addition, a local official in the northeast of the country said some 19,000 wheat and rice farmers had been forced from their fields, raising concerns over potential food shortages.

The Boko Haram insurgency has left some 3,600 people dead since 2009, according to Human Rights Watch. That figure includes killings by the security services, who rights groups have accused of carrying out widespread abuses.