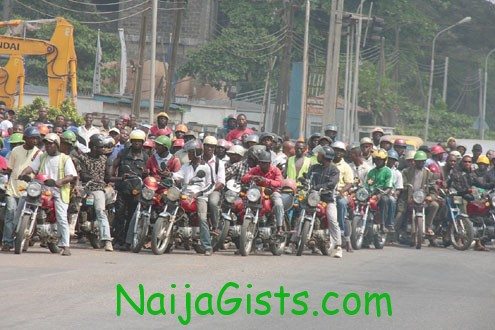 The okada riders took to the streets in Iyana Ipaja, Lagos to protest against the law banning their operations from 475 roads in Lagos state.

Some of the protesters who spoke with reporters said  the new traffic law was capable of sending them out of business.

An okada operator who said he plies Oshodi to Sango old toll gate area said the law will make him jobless and he does not want to join criminal gangs.

He pleaded that government should rescind the law.

Another okada rider said it was unnecessary to ban okada on some roads like Iyana-Ipaja to Agege, Acme or Wempco,  describing the action as wicked.

Because of the protest security was beefed up around Abule-Egba, Iyana-Ipaja and its environs.

As a detachment of policemen from Abattoir Police Division was deployed to the affected areas to protect life and property.