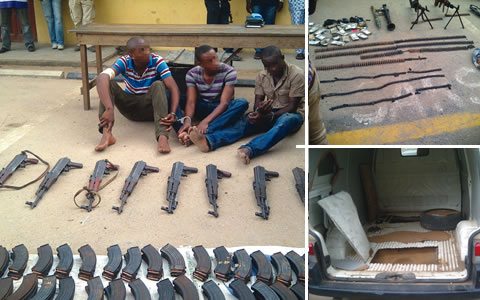 3 men who are part of a notorious robbery gang in Mushin, Lagos have been arrested by the operatives of the Federal Special Anti-Robbery Squad, FSARS, at Adenji Adele Road, Lagos Island, Lagos State, southwest Nigeria. naijagists.com

The suspects, Musiliu Shitta a.k.a MC, 28, alleged to be the leader of Moshalashi Street, Mushin terror gang; Lateef Balogun a.k.a Ika, 32, and Bolaji Salawu, a.k.a, Basia, 43, who the police claimed have been on the run for the past two years have been remanded in prison custody for robbery and murder, among others.

The suspects were arraigned before an Igbosere Magistrate’s Court on a nine-count charge of felony to wit, murder, armed robbery, attempted murder, terrorism and unlawful possession of fire arms.

Investigation by the police revealed that the accused persons were arrested at their hideout at Moshalashi Street, Mushin, Lagos with deadly weapons and live ammunition following a confessional statement by their accomplices, Lukman Lawal, a.k.a Oko and Omotosho Akande, a.k.a Tosho.

During interrogation, Oko and Tosho allegedly confessed that with other members of the gang they, masterminded the killing of about four persons and robbed others in Mushin between 2009 and 2011. They begged the police for forgiveness.

Supol Tayeola Oloruntoba, the prosecutor, said the offences committed by the accused persons contravene sections 6(b), 1(2)(a)(b) of the Robbery and Fire arms (special provisions) act laws of the Federation of Nigeria , 2004 and Section 231, 221 and 401(2) of the Criminal Laws of Lagos State, 2011.

Their plea was not taken as the court has no jurisdiction to try the matter.

They were also alleged to have robbed Rasheed Sikiru of his cash sum of N25,000 and a Blackberry phone while armed with one AK 47 riffle and pump action shot gun.

The presiding magistrate, Mrs. Oshodi Makanju, ordered them remanded in prison custody pending the advice from the office of the Directorate of Public Prosecution, DPP, on the matter.

Their case has been adjourned till Oct 19 for hearing (PMreports)