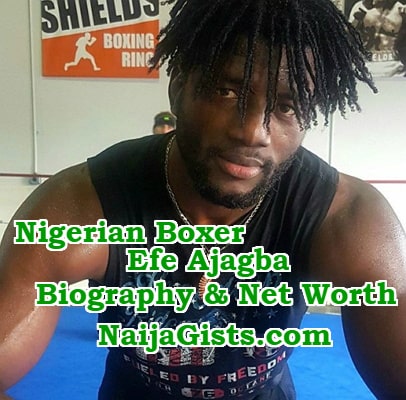 Many thought Anthony Joshua would be the last boxing star to emerge from Nigeria. Well, I have news for you – a new heavyweight star is just around the block; his name is Efe Ajagba.

You all probably remember the Nigerian boxer who didn’t have to raise a fist to defeat his opponent. However, not much is known about the boxer’s identity, background, profile, personal life, records and so on. In this article, we are going to be taking you through the personal and professional life of this boxer, who is acclaimed, by many, to be the next-rated professional boxer from Nigeria. Stay with us!.

Efe Ajagba, who is fondly called the One & Only, was born twenty-four years ago, on April 22, 1994, in the Niger-Deltan state of Delta. He grew up in his family home, in the riverine town of Ughelli in Delta State.

While growing up, Efe Ajagba had it tough, to the point that he had to work at a bakery, to enable him cater for himself and also assist his family. During this time, the promising boxer developed a keen passion for sports and went on to join an amateur football club in his hometown, in 2005. He made quite a few strides in Football, before eventually taking a career turn.

Fast forward six years, in 2011, Efe Ajagba opted for a career transition, albeit still within the world of sports. He opted for boxing and only three years down the line, he made his first international debut at Glasgow 2014 Commonwealth Games, in Scotland, where he represented the Nigerian boxing team in the Super Heavyweight division.

Four years after making his first major boxing appearance, Efe Ajagba has built a commendable profile in his short but promising career; destroying every obstacle in his path to glory. Today, he is widely regarded as the second best boxer, to emerge from Nigeria. According to the boxer, he’s going to rule and shake the world and at only 24, he is just about to start.

Although, we don’t know what triggered Efe Ajagba career transition from Football to Boxing, it is probably the best decision he’s made, so far, in his life.

In 2014, the boxer was selected as a member of Nigerian contingents to the 2014 Commonwealth Games in Glasgow. He was selected to represent Nigeria in the Super Heavyweight category. At the event, he won his first three fights; at the first round, second round (round of sixteen) and round-of-eight (quarter finals). In the semi-finals, Ajagba met a tougher opponent, in person of Australian boxer, Goodall Joseph, who defeated the boxer. Nevertheless, Efe came home from the tournament with a bronze medal.

In 2015, which was barely one year after Efe Ajagba’s exploit at the Commonwealth games, Efe led the Nigerian boxing team to the All African Games in Congo Brazzaville. He won gold at the tournament, knocking out his Seychelles opponent, Keddy Agnes in the 3rd round, to clinch the top position of the Super Heavyweight Boxing division (men) at the African event. The best is yet to come!.

A year after his gold-winning performance at the All African Games, Efe Ajagba won gold medal at the Olympics qualifying tournament, which took place in Cameroon. He went on to represent Nigeria at the much revered 2016 Olympic Games in Rio, Brazil. About one year after the Rio Olympics, Efe Ajagba made his professional debut, on July 30, 2017.

In the first professional fight of Efe, he faced United States’ Tyrell Herndon in California. He knocked out Tyrell to claim his first professional victory in Boxing. Since then, he has gone on to rack up more wins. His most famous victory came only few months ago.

On August 24, 2018, Efe Ajagba rose to fame in the most unconventional of ways. He won his bout against American boxer, Curtis Harper, to claim his 6th straight win in the heavyweight division. The fight ended before it even started, as the American fighter was disqualified for walking out of the fight, which was allegedly in protest over a payment disagreement between both camps.

The famous bout ended by disqualification, after only one second, making it the shortest bout and the fastest victory in the history of WBC. The Nigerian boxer followed up his record-setting feat with his most recent victory, against another American boxer, Nick Jones. He knocked out Nick Jones in the first round of their heavyweight bout, which held on 30th September, 2018, in California, United States.

Prior to Efe’s rise to fame earlier this year, he has recorded back-to-back wins against his opponents. So far, his professional record stands at 7-0-0 (6 KOs). The odd one out is, of course, his fight against Curtis Harper, which he won by disqualification.

Six of Efe Ajagba’s seven fights have been won by knockouts. His career summary has been outlined below, detailing his knockout victories.

Efe has maintained an average of one fight in every two months. With a total of seven fights in the last 14 months, we should be expecting the boxer back in the ring before the end of 2018 or early 2019, Although, Efe’s next opponent is yet to be disclosed, he is likely to be an American, just like all his previous opponents.

With seven wins in seven heavyweight bouts, the Delta State-born boxer has, without doubt, earned a sizeable sum over the course of his short career. While the actual earnings remain undisclosed, recent estimates put the fast-rising boxing star’s net worth in the region of $2 million.