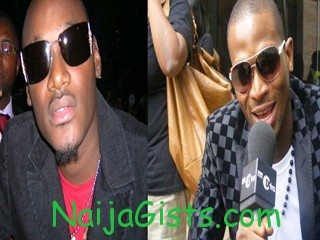 As far as today’s Nigerian music is concerned, its story is incomplete without these musicians. They are the movers and shakers of the industry, and their finger prints have shaped our music and made it acceptable to the world. They make bulk of their money from entertainment shows and events in the form of performance fees and corporate endorsements.

However, controversy have ensued on who is the greatest among them as regards fans, annual earnings and deals among others. Come with us as we take you into their world.

2face whose real names are Innocent Ujah Idibia ranks among the very best of Nigerian music stars. At the time, he came to limelight after leaving the now defunct Plantashun Boyz, 2face was virtually an unknown name in the nation’s music scene. But his desire to go solo under Kennis Music, and floating his own record label, Hypertek Entertainment, marked a turning point in his career. And today, 2face is a crowd puller any day.

His “African Queen” song released in 2006, was used in the soundtrack for the film Phat Girlz, which was released internationally. He also released a promotion album in 2008, releasing the single, “Enter the Place”. Problems with album distribution in 2007, caused as shift of the release date of the album from 2008 to 2009. Tuface released two singles from the international version of his Unstoppable album and is the first Nigerian artist to have an appropriately priced international album.

The Unstoppable International Edition album, released in 2010, won two awards at the 2010 SoundCity Music Video Awards. He also won the Channel O Music Video Awards Best African Western award and the MTV Africa Music Awards for Best Male and Artist of the year. He is part of the Sony All African One8 Project alongside seven other musicians across Africa recording a single with R.Kelly and Prince Lee titled “Hands Across the World.”

Although he just joined Twitter, he already has over eighteen thousand followers. Few months back, the rumour mills had it that the African Queen crooner paid the sum of N10 million each to Pero and Sunbo – his other baby mamas – as settlement before going ahead to marry, Annie Macaulay. He has since opened a multimillion naira supermarket for Annie, plus other deals he’s secured for himself.

He’s speculated to worth over N550m with endorsement deals with Guinness, Airtel which earns him N20m and N22m respectively. He charges between N4 million and N5 million for shows. The artiste has invested heavily in real estate and stocks which is fetching him huge money.

Dapo Daniel Oyebanjo is popularly known as D’banj. He has won several music awards including the awards for Best African Act at the MTV Europe Music Awards 2007, Artist of the Year at the MTV Africa Music Awards 2009 and BET Awards of 2011 for Best International Act; Africa.

He adopted the stage name D’banj, a combination of his first name Dapo and his surname Oyebanjo. D’banj is currently best known internationally for his 2012 summer hit Oliver Twist, an uptempo dance fusion of Afro-Beats and electronic dance music that topped the African charts 2011 and was a top 10 hit in the UK singles chart in 2012 reaching no.2 on the UK R&B chart.

He owns businesses like a TV reality show called Koko Mansion, a hangout in Nigeria and US, Koko Lounge, Koko Foundation and Koko Mobile. D’banj also signed a deal with Glo worth N7 million. Power Fist and Virgin Colur soft drink also signed him into a multi-naira deals, and another multimillion deal with a popular jeweler.

They are identical twins who have performed and released several records under the Square Records. They remain the best R&B duo group in Nigeria and in 2011, they were signed under Konvict Music label owned by Akon.

Among the two, Peter is said to be a better singer while Paul dances better. Songs like Beautiful Oyinye, their first album, Last Nite, their second album, Get Squared recorded a high rate of success. Their songs always won awards because of their new dance moves and excellent quality. It’s best selling album, Game Over sold over 8 million copies worldwide in 2007. in 2009, they released another Danger with both winning awards like the BET and MTV Best Act.

The duo just acquired a private jet. But before then, they were said to be having problems with their landlord who allegedly gave them a quit notice. They have since built a mansion they call “Square Ville”, valued at N300m.

Both have now entered into a distribution deal with Universal Music Group for the distribution of the CD’s, DVD’s globally.

They KORA award they won in 2010 came with the sum of N150m. Shortly after, they got a deal with Glo worth N240m for four years. Their American tour of seven cities earned them a whooping sum of N150m. They own Rayfield Hotel, Jos and two other manufacturing factories where they built a bakery and pure water manufacturing companies also in Jos. They are said to charge N2 million per show. [Vanguard]