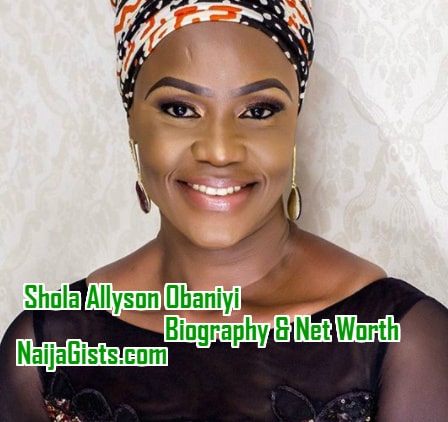 Shola Allyson is one of those artists who possess a unique an unmistakable voice. She is a Nigerian gospel singer and song writer who has sang well over a hundred songs.

She was born sometime in the 1970s in Lagos State and had her primary and secondary school in Lagos as well; in Anglican primary school Ikorodu and Shams-el-deen Grammar school Ikorodu respectively. She is reported to have studied Business Studies and obtained an NBTE (National Board for Technical Education) Certificate from Government Technical College Ikeja.

Shola went further with her education in 1997 by attending the polytechnic Ibadan where she went to study Music Technology and obtained a Higher National Diploma with honors (HND) upon her graduation from the polytechnic.

She had steadily been laying the foundation for her music career by starting as a backup singer from as young as the age of thirteen. She gradually made her way up to become a professional backup singer performing with artists like Yinka Ayefele, Wasiu Alabi (Pasuma) and the likes.

In 2003 she finally got the opportunity to release her first album purely by a chance meeting with a stranger on a bus so she said. She was required to record a soundtrack for a movie called Eji Owuro, it was a Yoruba movie produced in 2003 and it featured stars like Bimbo Oshin and Desmond Elliot. It explores the love story of a couple. Though an old film, the movie is still worth looking at.

The release of the movie was a hit and the studio decided to make a complete album of the sound tracks for the movie. The rest they say is history; the album was a great success which ushered Shola Allyson into lime light. Since then, she has released quite a number of hit albums but the favorite of many still remains the album Eji Owuro.

She has released a total of six albums the most recent produced in 2018 was titled imuse.  Imuse is said to have been inspired by the challenges she has encountered from the beginning of it all and how far her hope and trust in God has brought her. How God has shaped her over the years and granted her wisdom and confidence to become who she is today.

In a previous album of hers released in 2009, she worked closely with Cobhams Asuquo a remarkable gospel music legend and quite a number of songs were performed by the duo in that album titled Im’oore. Her other albums include Ire, Gbe je f’ori, and Adun.

Shola Allyson has been nominated for several awards however her winning any award is not public knowledge. She was nominated for the best indigenous concept for 2013 and also for the Nigerian Music Video Awards for the same year.

She was featured in about five seasons on Mtn project Fame West Africa as one of the judges.

Shola Allyson has been married to Toyin Obaniyi almost from the beginning of her career. The couple is said to have gotten married in March 2003 and are blessed with three children two boys and a girl. They have presently been married for about sixteen years and are still going strong.

They are said to have met at Celestial Church of Christ and had connected almost for the start. They started out as friends and emotional interests naturally developed as time went on this eventually cumulated in both getting married.

Shola is a very private person, she has effectively been able managed her family and career and also shield her family from the meddling of the press, as much as possible.

Her husband Toyin Obaniyi is said to be her biggest fan after God. She has been known to frequently voice her appreciation to her husband for being supportive and loyal to her music career over the years. She has so far been able to prove that female artists do make good wives and mothers.

She has efficiently worked in collaboration with a few talented artists like Tope Alabi, Cobhams Asuquo and Adekunle Gold.

He is a Nigerian gospel Artist, producer and Sony ATV signed songwriter. He was born Cobhams Emmanuel Asuquo on the 6th of January 1981. Cobhams has worked with several musical talents local and international, gospel and non gospel.

He is said to have produced, written and co-written quite a number of popular songs by well known artists like Asa, Shola Allyson, Banky W, Timi Dakolo, Omawunmi and a host of others. Cobhams has performed on stage with international artists like Ed Sheeran and Beyonce. His first single titled Ordinary People came out in 2014 and it was a complete hit.

He has several outreach programs for musical acts and has been known to organize several events and concerts within and out of Nigeria. He well known all over the world and has also been featured on prestigious TV channels like CNN. He is also an ambassador for MTN.

Shola Allyson’s album Imo’ore was reportedly produced by Cobhams Asuquo. Many songs in the album were also believed to have been written and co-written by himself and Shola Allyson; the duo also performed and recorded together. This album was launched in 2009.

Tope Alabi is also another remarkable gospel song writer, movie music composer and singer whose genre of music is quite similar to that of Shola Allyson. She has a melodious voice which instantly catches the attention of many. Her songs are usually performed in her indigenous Yoruba language.

Born on the 27th of October 1970 she is the only daughter of her parents. She is a native of Imeko, in Ogun State. She had her secondary school education at Ibadan and went further to study Mass communication at the Polytechnic Ibadan.

Her earlier days in music saw her working with various theatre groups, her transition to gospel music came about when she became born again.

She presently has about fourteen albums and well over 300 soundtracks to her name. Tope Alabi’s debut album was titled Ife ti o common released in 2001 and her most recent released in 2018 is titled Yes & Amen. Other popular albums include moriya nu, Angeli mi and Kabiosi.

On several occasions during programs and concerts, the two have been known to perform together and obviously appreciate each other’s talent and music. It was once said that Shola Allyson was in competition with Tope Alabi however, she came forward to clearly discarded such sayings and instead expressed her appreciation in being given the privilege to work with Tope Alabi

Adekunle Kosoko known for his stage name Adekunle Gold is a talented song writer as well as a singer. His interest in music was reportedly born as a result of listening to musical legends, the likes of Ebenezer Obey and King Sunny Ade (KSA). His interest in music propelled him to join his church choir in his teenage years.

He first became popular for the release of song titled Sade which put him on the nomination list for the Headies 2015. He was formerly a member of the YBNL Nation, a brand created by musician Olamide. Adekunle is also an ambassador for Unity Bank.

He recently got married to afro pop musician Simi. A few of his most popular songs include Sade, Ariwo, Orente a song believed to have been written and sung in honor of then his girlfriend  Simi, whose middle name interesting happens to be Bolatito as mentioned in the track: also  recently tracks like Ire.

Adekunle Gold is one of the few musicians in the Nigerian music industry that has a blend of melody and sensible lyrics. His songs are known to have depth and pass one meaningful message or the other. He also possesses a peculiar style of singing and has a high value and appreciation for the African Culture especially his indigenous tribe Yoruba.

He is known to dress in the African print and show off unique African fashion styles. Some would say he is very in touch with his roots, it is probably for this reason he was selected for the rare music collaboration with gospel musician Shola Allyson for a track titled Alujanjankijan which is a modification of an indigenous folklore song.

Shola’s most recent album is popular for songs like Mo ju ba, Gbojule, jiji moji and many others. It also contains a bonus track of Alujanjankijan performed with Adekunle Gold.

Questions were asked about her decision to collaborate with a non gospel artist however she made it known to the crowd that her decision to do that was purely from a message she received from above.

She did reveal that other secular artists have approached her after her song release with artist Adekunle Gold, she however did not feel the leading to work with them.

Be it a sole performance or in collaboration with other artists Shola Allyson’s lyrics and music has a knack for capturing the hearts of many.