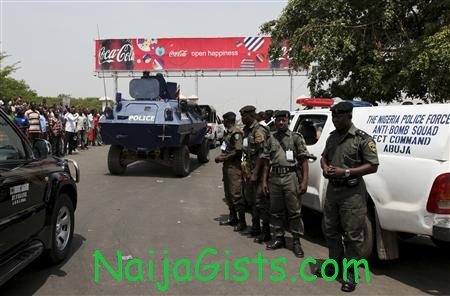 Like a thief in the night, suspected Boko Haram fighters went on the rampage in northeast Nigeria overnight, killing 10 Christians with guns and machetes and burning down their houses, witnesses said on Sunday.

The attack happened in a village called Chibok, in a remote part of northeastern Borno state, at the heart of an insurgency led by Islamist sect Boko Haram, Reuters has reported.

“Suspected Boko Haram came at night and set people’s houses on fire before killing their victims,” said Nuhu Clark, a former local councillor of the village who escaped the attack.

He said he counted ten bodies afterwards. The Boko Haram attackers reportedly slit the throats of their victims.

“The attackers came in around 9 p.m chanting Allahu Akbar, which made us suspect they are Boko Haram. They moved into selected homes in the predominantly Christian part of town and slaughtered 10 people like sheep”, said a local government official.

A police spokesman said they were aware of the incident but were still trying to confirm casualties.

Boko Haram fighters have killed hundreds of people since launching an uprising against the government in 2009, the usual targets being security forces, government officials or Christians, whom Boko Haram sees as infidels.

But the insecurity the conflict has created has also enabled criminal gangs who are nothing to do with the sect kill and rob.

In a separate incident, militants burned down three churches on Saturday in Gamboru, also in Borno state, said trader Umar Abubakar, who witnessed the attack. Two policemen have been reportedly killed. (Reuters)