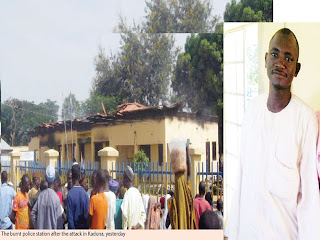 Abdulazeez Haruna, a guard from Niger Republic, has hacked his employer, Engr. Mrs. Mary Akioye, with a machete, inflicting injuries on her because he claimed his boss failed to serve him his breakfast at about 8 a.m. on the day of the incident.

Mrs. Akioye, 61, collapsed and bled profusely after the attack.

She was rushed to a nearby hospital where she was revived by doctors.

Haruna was later arrested by the police and charged with attempted murder before an Apapa Magistrate’s Court.

Mrs. Akioye described the attack as a bitter experience, adding that she was shocked because she had always treated Haruna as one of her children.

On the day of the incident, Mrs. Akioye said she woke up in the morning and was feeding her fish in a pond when her security guard approached her for food.

She pleaded that food was not ready and that she would cook immediately after feeding her fish.

“He threatened that he would kill me with the knife he was holding in his hand. I sensed he might kill me since I was the only person in the house. I begged him to allow me to go into the main building to bring money for him to buy food.

“While I was looking for money, the next thing I felt was a machete cut on my leg, neck, head and other parts of my body,” she narrated.

She then started running to the gate shouting for help before she collapsed and her neighbours  came to her rescue. They contacted the police who arrested Haruna.

He is now facing a charge of attempted murder at Apapa Magistrates court before the presiding Magistrate, Mrs A. K. Shonubi.

The suspect had earlier pleaded guilty and later changed his plea to not guilty during the fact and sentence.

The prosecutor, Mr. Kalu Uche reminded  the court that the offence he committed was serious, adding that the  defendant has not fixed address and could jump bail and escape to his country.

The court granted Haruna bail in the sum of N20,000 with one surety who must be a community leader within the court’s jurisdiction.

The matter was adjourned till 13 July, 2012 for mention while Haruna was remanded in prison custody pending when he will meet his bail condition.