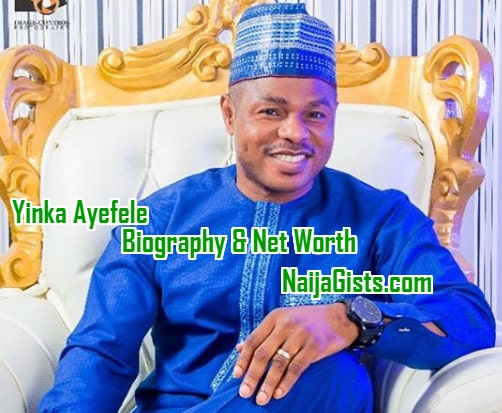 Yinka Ayefele is a talented Nigerian gospel musician, song writer radio personality and producer. His music is a peculiar blend of gospel Fuji and afro juju beats. He has released a great number of albums since his music career began and his songs are usually delivered in Yoruba. It would seem any ceremonial gathering of people is incomplete without his music being played.

Olayinka Ayefele popularly known by his stage name Yinka Ayefele was born on the 1st of February 1968. He is a native of Ipoti a town located in Ekiti State. He had his primary and secondary school education there in Ekiti. Yinka Ayefele further went on to attend the Ondo state College of Arts and Science located in Ikare-Akoko Ondo State.

He began working with the Federal Radio Corporation of Nigeria Ibadan. Ayefele’s stay in this Organization was not particularly lengthy but during his stay there, he was the best at what he did. He was responsible for creating musicals tunes (jingles) used in advertisements and general works of music.

Yinka Ayefele had always had the passion and love for music from a very young age. Though he never dreamed of making a career out of it, as his father who was a school teacher and educationist was against such and therefore never encouraged his musical interest. To please his father, he had hoped to eventually get into the banking industry.

Although the artist had previously been into musicals works, the idea of turning it into a professional career did not come about until the occurrence of an event which marked a turning point in his life.

In December 1997, he was involved in an accident on his way to a radio function. He turned out to be the only survivor out of the many victims who were brought along with him to the hospital.

The accident left him confined to a wheel chair as a result of a spinal cord injury. He revealed that after over twenty years, he still lives with a little physical pain in his ribs as well which was also brought on by his injury in the accident those many years ago.

His experience and the advice of friends while he was still in the hospital; inspired and eventually led him into releasing his first album in 1998. The album was titled Bitter Experience and since then he has released over twenty (20) albums.

He has a band with which he performs at live events and concerts. It is a famous and highly sort after band, they are known to perform at various occasions on a weekly basis.

Ayefele’s music has been able to transcend the religious barrier as his songs are widely loved by both the Christian and Muslim population. He has a solid fan base made up of Christian folks and Muslims alike.

He has always been gifted with the musical talent; Music and the playing of musical instruments is something which has always come naturally to him. It therefore was not a hardship for him to venture into the music industry on a professional level.

Prior to his accident he had recorded two of his tracks with no particular professional intent in mind. But afterwards he went on to add more tracks to the already existing ones and then turned it all into his first album. The album turned out to be a complete hit. His second album titled Sweet Experience also followed the same successful path. This further encouraged him to do more of such and he has released at least an album every year since then.

His love for radio and broadcasting eventually inspired him to set up a radio station in Ibadan known as Fresh F.M. it turned out to be one of the most widely loved stations in Ibadan. The radio station is said to now have a daughter branch in Ogun State.

Yinka Ayefele has come a long way since his accident. Over the years he has worked tirelessly to see his dream of success being actualized. He has successfully managed to turn his circumstances into a great advantage.

Although, he revealed he would rather have had success as well as the use of his legs, he is however thankful to God for spearing his life and bringing him thus far. Ayefele also has the confidence and conviction that he will walk again.

He is married to Temitope Titilope and they reportedly have three children together, all boys the last of which was born sometime in 2014. The couple is said to have been married for about nineteen (19) years, as they got wedded in the year 2000.

His wife Temitope Titilope Ayefele was born and raised in Ibadan. She revealed that she was born into an average family who was not overly rich but also was not lacking. She attended Kings Convent Primary School and had her secondary education at Ibadan Grammar School located in Molete Area.

She had her NCE at St. Andrew’s College between 1992 and 1995 and further went on to bag a degree in Economic Education from the University of Ibadan from 1996 to the year 2000.

The couple had earlier met in 1996, prior to his accident and where reportedly together in the hospital through the artist trying time due to the accident. She ascribed all glory to God for the success of her marriage. The couple is always thankful to God for their journey so far as they have been married for almost two decades.

In the year 2018, one of his sons known as Bola Ayefele based on reports, graduated from the Howard University (HBCU) located in Washington D.C. Ayefele was present for this ceremony and was overjoyed about this achievement, as he took to his social media page to share pictures of himself and his son in their celebration mood.

He has a mansion in Ibadan which houses his music studio as well as his radio station Fresh F.m.  The building which was previously under reconstruction is said to be worth over N800 million. Another branch of the radio stations is located in Ogun state.

He is the creator of the merry makers band where he is said to love and appreciate each member of the band equally, as they each have special and unique roles they play.

He also has a Non Governmental Organization (NGO) which kicked off in 2009 launched in honor of his birthday. The organization is known as the Yinka Ayefele Foundation.

He was awarded an honorary membership by former President Goodluck Jonathan into the order of the Niger.

Since his debut album (Bitter Experience) in 1998 he has released over twenty albums and still counting. His debut album as it was properly called contained a description of the bitter experience of his accident and his thankfulness.

His second album was released a year after the first, it was titled Sweet Experience.

In 2009 he released the album Transformation. It was inspired by the circumstances surrounding his career, his journey through it all and God’s faithfulness in his life.

Some other albums of his include: Divine intervention, fulfillment, Comforter, Upliftment and most recently favor his latest album which was launched in 2018.

His mansion in Ibadan said to be worth about N800 million, was recently partially demolished by the state government. It was demolished in August 2018. The mansion known as the Music House contains his radio station, music studio and other structures. The demolition stirred up sympathy and anger in loyal fans of his music and radio station. This subsequently let to a crisis as several individuals came out to protest the ill treatment of the gospel artist. He won the love and loyalty of many over the years for fighting and making something out of his life and not letting the challenges of his situation stop him from rising to fame.

The partial demolition was carried out at night for fear of the resistance which would have risen up to stop them, had it been done in the light of day.

The structure was said to have had a few structural conflictions with the State planning scheme. The artist was reportedly in the process of arranging for a structural change when the demolition was carried out rather hastily.

It was candidly stated that the governor of Oyo state Abiola Ajimobi was at odds with Yinka Ayefele for political reasons. The rumor seemed to ring true based on the evidence.

Governor Ajimobi later came forth to apologize for the damage done to the Music house. He also stated that plans were being set in motion for the reconstruction of the property, all expenses to be paid by the government. The project was slated to be finished by December 2018. The governor is said to have stood by his word as the reconstruction of the Music house has indeed been completed as confirmed by Ayefele himself.

Yinka Ayefele has indeed come a long way since his experience over two decades ago. His story is an inspiration to many.