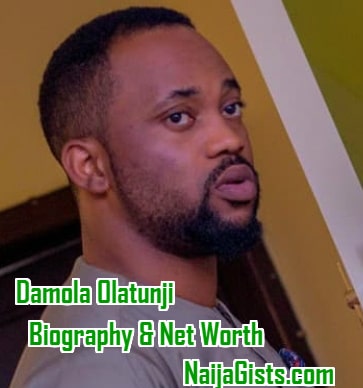 Nollywood actor Damola Olatunji is one of the fast rising actors in the movie industry. He is an actor of the Yoruba movie industry and a well known one at that.

He was born on the 2nd of February and is a native of Edo agbo located in Osun state; he attended his primary and secondary school at Ife also in Osun state. Damola Olatunji is a graduate of Yaba College of Technology Lagos with a certificate in Electrical Engineering.

His flair for acting is said to be something which he did not originally have, but developed in him sometime during his school days. This interest propelled him to join a church theatre group. This group was into the performing of stage plays. He revealed his original intention had always been to become an Engineer. However, his digression into the movie industry and subsequent fame has obviously worked out well for him.

Damola slowly began familiarizing himself with the trade of the movie industry. He associated with actors and was encouraged and mentored by already existing acts, which further influenced his switch into the movie industry. His big break came for his role in the movie Ojo which was directed by a potent mentor of his Yomi Fash Lanso. It was also produced by a remarkable actress in the Yoruba industry Opeyemi Aiyeola.

Growing up he was reported to have been raised by his disciplinarian mother Mrs. Ajibola Olatunji as his father was frequently absent from home. His mother is credited for inculcating himself as well as his siblings in the act of responsibility and good morals.

His deviation into the movie industry is said to have been met with a little doubt from his mother as she was greatly opposed to the behavior and lifestyle of famous celebrities. His pledge to his mother has propelled the actor to live his life differently and uncorrupted by fame as opposed to other stars in the entertainment industry, so he says.

He is not just an actor who has starred in countless number of movies, but he is also a producer as well as a director. The movie ojo which brought him to stardom was fortunately for him, his debut movie.

This star was at first married to Raliat Abiodun Sobowale. The two were reportedly in a relationship for about seven years before it was sealed in the union of marriage on the 8th of April 2013 in a ceremony which took place in Lagos.

The actor who was overjoyed by his marriage seemed to have every intention of staying true to his vows; as he publicly made it known to all hopeful female fans that he was now a married man. He further voiced that he was an ardent believer in the sanctity of marriage.

It however came as a surprise when he became the father of twins born to him not by his wife, but by his rumored mistress, also an actress known as Bukola Awoyemi.

Damola and Raliat his first wife were said to have been living separately almost from the beginning of the marriage as Raliat Abiodun was mostly based in the United Kingdom. She was believed to have been making preparations for his relocation to the U.K to be with her.

The news of the delivery of his twins from another woman seemed to have been what sealed the fate of their marriage. Damola Olatunji was accused by his wife of being uninterested in saving his first marriage and had therefore abandoned her. All efforts by his wife to fix things proved futile. Her constant absence was also believed to have contributed to the breaking of the marriage.

Both sides of the story however were not heard as Damola Olatunji and Bukola Awoyemi remained silent on the matter.

They both supposedly met at a movie set about a year into the actor’s first marriage and were said to have begun an affair which resulted in Bukola Awoyemi birthing twins on the 3rd of January 2015. Prior to this time, the actor had ardently denied having anything to do with Bukola Awoyemi or being responsible for her pregnancy as he was accused of on several occasions.

The wedding ceremony between the two was not made public, they are said to have had a private wedding sometime in 2015. Both are now believed to be legally married and refer to each other as such.

Bukola Awoyemi is a gifted actress born sometime in 1988. Her part in the award winning movie, produced by Tunde Kelani titled Arugba was said to have been where she had her big break in the movie industry. Her career in acting however kicked off while she was still a student of the University of Ilorin where she studied performing Arts. Unlike her husband she is reported to have always been passionate about acting.

From the onset of her career, she had never been involved in scandal of any kind until her relationship with Damola Olatunji broke out. She revealed that was one of the most difficult times in her life as she had to deal with individuals who were unaware of the real story yet were so quick to judge.

In a message to her husband wishing him a happy birthday, she also revealed how her husband wished he had waited for her indirectly terming his first marriage a mistake and also how he had a hard time convincing her to be with him. She has also affirmed on a few occasions that they are now legally married.

The couple is believed to be happy together and growing strong in their union; the scandal which surrounded their affair and marriage, a long forgotten tale. Bukola has featured in quite a number of movies since her career begun and is credited for producing a movie titled Igba nba jo.

From his first marriage to Raliat Abiodun Sobowale, he is not known to have had any children. The birth of a set of twins by Bukola Awoyemi ushered Damola Olatunji into fatherhood. He has a set of twins a boy and a girl called David and Deborah added to their standing names as Taiwo and Kehinde, the Yoruba names popularly given to twins.

The twins a currently four years old and have come a long way since their birth on January 3rd 2015. The actor has been known to share pictures of his prized jewels as he is obviously a proud father who enjoys the company of his beautiful children.

His wife Bukola Awoyemi did reveal the efforts which had to be put into nursing both her children. Looking after them simultaneously was understandably a stressful time for her. As expected she took a break from her career as an actress to properly see to their well being. However, she is back to the movie screens to wow the crowd with her amazing performances.

Damola Olatunji Hotel And Net Worth

Damola is said to have quite an interest in real estate. He purportedly purchased a Hotel somewhere at the Sango Ola area. The property was said to have been secured for about N 60 million. After the acquisition and commissioning of the property, the actor went further to disclose his future intentions of venturing more into this area.

The ownership of the hotel and the story of acquiring a hotel was later confirmed to be untrue and the actor later denied any such incidence occurring.

He is yet to win an award he however has been nominated on several occasions. The most recent nomination was for the year 2017 for the City People Movie Awards where he was one of those nominated for Best Supporting Actor of the year for the Yoruba movie industry. He was as well one of the nominees for the Director of the Year Award also for the Yoruba movie industry and also by the City People Movie Awards.

It features Damola Olatunji amongst other stars like Wale Akorede. It is an exciting movie in which unfolds a story of great betrayal.

Ilu Ominira is a thrilling drama featuring the likes of Femi Adebayo, Aisha Lawal, Damola Olatunji as well as Lateef Adedimeji. It explores the story of a man whose family has been affected by certain bad patterns, which have been in existence for many generations and his attempt to find a solution before it becomes too late.

It is a thrilling movie also starring Damola Olatunji alongside award winning actor Lateef Adedimeji and Bimbo Oshin. The movie was also directed by Damola Olatunji.

The actor is obviously making waves in the industry and gradually rising to a place of prominence.