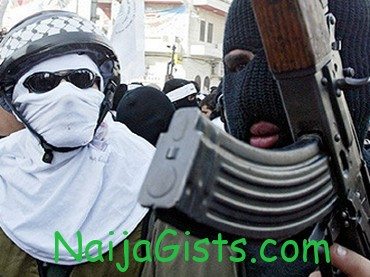 Also a car belonging to the Divisional Police Officer (DPO) and many houses in the town were burnt. Eyewitnesses told Saturday Sun that the unknown gunmen came from the mountainous area of Maiha about 12.30am yesterday and operated till 3am. In the attack, they pounced on the prison in Maiha and set 35 inmates free. It was gathered that the attackers also stormed the divisional police headquarters, which they set ablaze.

It was at the police headquarters that no fewer than 20 persons were killed, while several persons sustained injuries. An impeccable source also told Saturday Sun that the Presidential lounge, located in Maiha was also set ablaze by the attackers, where a guest was killed. From there, they proceeded to the prison, where they set inmates free. The attackers also stormed the Local Government Education Authority complex, which they ransacked and set ablaze.

As at the time of filling this report, the police command had beefed up security in Mahia and other parts of the state. About two weeks ago, a similar attack was launched in Madagali, where a police station was invaded by gunmen. Madagali also shares border with the Camaroun Republic and Gwoza in Borno State.