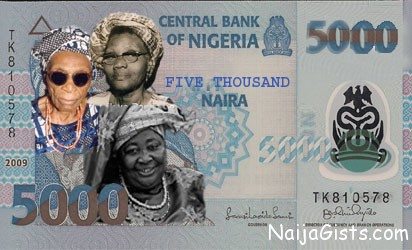 My interest today on the new N5,000 currency note about to be issued by the Central Bank of Nigeria, CBN, has nothing to do with the controversies of whether it should be issued or not. From all indications it is already a done deal. naijagists.com

I want to examine the three eminent Nigerian ladies chosen to grace the obverse (front) side of the note. These are: Dr Margaret Ekpo, Mrs Olufunmilayo Ransome-Kuti and Hajiya Gambo Sawaba. Who were they?

Ekpo was born into the family of an Igbo father, Okoroafor Obiasulor and an Ibibio woman, Inyang Eyo, in Creek Town, Calabar in 1914. She married an activist medical doctor, John Udo Ekpo and spent most of her political life in Aba, specialising in the mobilisation of women to fight for their rights and fully participate in the politics of decolonisation on the platform of the National Council of Nigerian Citizens, NCNC.

Abigail Olufunmilayo Thomas was born into an Egba family in Abeokuta in 1900. She later married Rev Israel Ransome-Kuti. Both were educationists. But Funmilayo was a radical fighter for the rights of women, becoming the first woman to ride a car in Nigeria. She was, like some of her equally radical children, often punished by government for her revolts against dehumanising colonial and traditional practices. Both Margaret and Funmilayo were so high in the political calculations of the pre-independence era that they were selected as part of the Nigerian delegation to the talks that produced our independence.

Hajiya Gambo Sawaba had a more daunting struggle. Born of Nupe parents, she spent most of her time in Kano and environs where she carved a niche in the Mallam Aminu Kano school of politics (democratic humanism) which ranged itself against the entrenched Sokoto Caliphate system that relegated women to the background and pandered to the royalty and elite. Unlike Margaret and Funmi, she did not have much formal education.

Sawaba shared everything she had with the poor and was passionate about one united Nigeria where religion, region and gender would not be a barrier to anyone’s development. During military President Ibrahim Babangida’s reign she once famously warned:

“If I hear that the President is oppressing his wife I will go and put my mouth in it!”

Whoever made this selection must be commended for picking exemplary women pioneers; the foremost Founding Mothers of Nigeria, whom the nation has let down by beating the track of tribalism and sectionalism that have thwarted the Nigerian Dream. These national icons should inspire both men and women of Nigeria to strive towards one united, progressive nation free of primordial discontinuities.

Drop Ajami from the notes

But the item I will like to see withdrawn from our currency notes is the Arabic inscriptions (Ajami) still on our N100, N200, N500 and N1,000 notes. Indications are that the sample of the N5,000 does not have the Ajami, just as Charles Soludo’s CBN dropped it from the polymerised lower currency notes. We should only have objects, persons and figures that bind us together as a nation on our national flag and currency. Anything that concerns only one religion or section should go. They were unilaterally imposed. Majority of Nigerians do not even understand what they mean. However, if the issue is debated in the National Assembly and two-thirds majority agree to let sleeping dogs lie then so be it.

Around this time last year when Alhaji Aliko Dangote led the pack of National Honours Award winners to bag the second highest honour of Grand Commander of the Federal Republic, GCON, with the name of Dr Mike Adenuga conspicuously missing, I cried foul. I did not protest that Dangote did not merit the award. I had also complained when Nollywood star, Aki was given an Award with Pawpaw, his “twin brother” left out.

I argued that even though both men were great industrialists and world acknowledged successful businessmen, with thousands of Nigerians and foreigners alike on their payrolls, Adenuga made himself more relevant to Nigerians outside his business sphere through phalanxes of philanthropic outreaches on a scale not seen since the days of Chief Moshood Abiola.

His Glo Group was the first to pump enormous amounts of money into sponsorship of Nigerian football, a venture that was suspended due to lack of accountability by the football ruling authorities. Glo financed many players in the Nigerian movie and music industries and played a leading role in launching our celebrities to the world stage through sponsorship.

They even went into the sponsorship of rich cultural festivals, and my community, Abiriba, was a profound beneficiary of it in July 2012. Our musicians thrilled the youth on campuses and cities around Nigeria on the Glo bonanza. They helped the entertainment industry boom for the first time ever.

Nigerians fought hard for the granting of operating licence to the company and when Glo eventually got it in 2003, it bagged the prestigious portfolio of Second National Carrier. Glo gave back. Since my critique of Dangote’s low rating on corporate social responsibility there have been some noticeable wake-up signs.

We are glad that President Goodluck Jonathan is giving honour to whom it is due, just as he responded positively to Pawpaw after we complained.

Our people who have made money through hard work, putting thousands of young people to work and giving back to society through many acts of philanthropy must be encouraged to do more. Adenuga’s GCON is befitting. Monday, September 17, 2012 is the D-Day in Abuja.

Congratulations! But please do more!(vanguardngr)