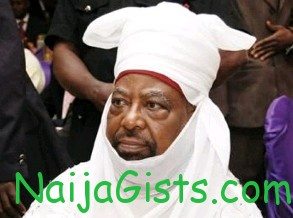 The Emir of Kano, Ado Bayero’s departure to London at about 1.35 pm Sunday was witnessed by the state’s Deputy Governor, Dr. Abdullahi Umar Ganduje, Islamic scholars and top government officials.

The 83-year-old Emir, said to have been hit in the attack on his convoy, travelled in a private jet which took off around 1.30pm on Sunday for London.

He travelled in company with his two sons-the Ciroman Kano, Sanusi Ado Bayero; and Turakin Kano, District Head of Nassarawa, Alhaji Nasiru Ado Bayero, who were also hit by bullets during the attack on the Emir.

Ganduje told journalists at the airport that three suspects had been arrested by security agencies in connection with the attack.

The deputy governor said the suspects had been cooperating with security agencies in their investigations. He described the incident as “very unfortunate” but said the Emir was “very stable.”

He said, “We thank God that his royal highness was able to survive the attack, as you can see now, the Emir is leaving for medical check-up in London.

“We embarked on massive prayers to seek God’s support to expose those behind this crime. I spoke with the Emir and he narrated to me how it happened.”

Special Adviser to the Governor on Emirate Affairs, Alhaji Tijjani Sanka, told journalists that Bayor had earlier planned a trip to London before the attack.

Also on Sunday, the Northern States Governors’ Forum described the attack on the Emir as a terrorist act.

Chairman of the forum and Niger State Governor Babangida Aliyu called on the government to quickly check the spate of violence in the country.

The northern umbrella group, Arewa Consultative Forum, expressed shock at the attack and called for thorough investigation, while the Islamic body, Jama’atu Nasril Islam, said governments at all levels should give security of lives and property utmost priority.

“The JNI condemns, in strongest term, this dastardly act that led to loss of innocent lives, and again reiterates its earlier calls to governments at all levels to give security of lives and properties of citizens the utmost priority it deserves,” the group said in a statement on Sunday.

Also, the Peoples Democratic Party described the attack on Bayero as an assault on the traditional institution.

A statement by its National Publicity Secretary , Olisa Metuh, said it was deeply saddened by the wave of attacks in the country and urged those behind the acts to have a rethink.

It added that there was no justification for bloodletting and urged Nigerians to learn to live harmoniously with one another.

It advised those who had grievances to seek legitimate means of getting redress instead of resorting to violence.