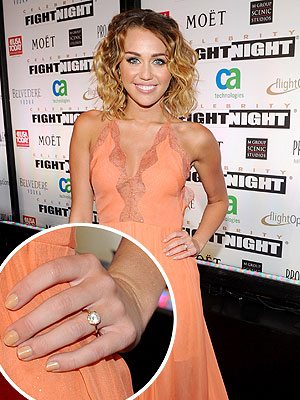 June 5, 2012 – US actress and singer Miley Cyrus has announced her engagement to her beau Australian ‘The Hunger Games’ actor Liam Hemsworth.

The 19-year-old former Disney star confirmed the happy news today Wednesday, June 6, 2012. ‘I’m so happy to be engaged and look forward to a life of happiness with Liam’, Cyrus told to People.com.

The couple have been dating for three years after meeting on the set of the 2010 romantic drama film ‘The Last Song’.

‘Heaven is a place on earth, I love you more today than yesterday but I love you less today than I will tomorrow’, Miley Cyrus tweeted a series of messages