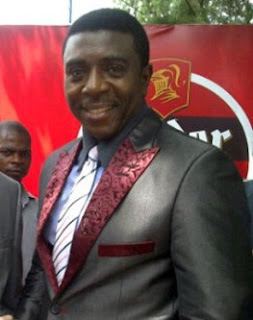 This biography of Bob Manuel Udokwu is brought to you by NaijaGists.com

Bob Manuel Udokwu is a leading and pioneer Nollywood actor. A native of Idemili North Local Government who prides himself as having come from the same town as the literary legend Chinua Achebe, Bob, husband of the always gorgeously looking Cassandra, mother of his two kids yet, whose deep involvement in the arts as his peers allude was not accidental has proved overtime that his, is indeed a marriage with the arts that was consummated at birth.

An actor of vast credit and producer of ‘Wedding Bells’, Bob’s first take as a producer, there was a time in the life of the Nigerian movie culture dubbed Nollywood when Bob would feature in nine out of every ten movies released. Bob was also at a time, the producer’s first choice for the actor who would get the lead actress to fall in love with him effortlessly. Born in Enugu under the star sign Arian having been born on April 18, Bob was one child star who exhibited a great passion for acting. But it was not until 1986, the same year that Bob gained admission to study theatre arts at the University of Port Harcourt that his artistic bent manifested and became really noticeable. Since then, Bob, one time National President of the Nigerian University Theatre Arts Association (NUTASA) and coordinator of the NYSC drama troupe during his service year in Oyo state has not looked back. But prior to his graduation from the University of Port Harcourt, Bob had become something of a local champ. In school, he was a part of every other stage and screen show. Off campus, his involvement in the production of a musical on the prime time belt of the Federal Corporation of Nigeria (FRCN) Enugu, ‘Kata Egwu’ (guess the tune) conferred on him a star status.

He also joined an amateur theatre group, the People’s Theatre based then at the grounds of the Institute of Management Technology (IMT) Enugu to hone his skills. An old boy of St. Peters Primary School now Hill side primary school Enugu and Oraukwu grammar school also in Enugu, Bob, a recipient of a number of industry awards amongst them the Nigerian Christian Filmmakers Role Model Award for the year 2004 and the THEMA and REEL awards Best Actor award first hit the mark when he featured as a supporting lead actor in that long rested television soap ‘Checkmate’. It was that outing that undoubtedly shot him into prominence. Soon as the award winning ‘Checkmate’ was rested, Bob who holds a Master degree in International Relations from the University of Lagos moved on. Armed with a training in theatre arts and a pouch filled with stage and screen production he has taken part in, It didn’t take long before Bob became the toast of most first rate home video producers and directors. It got to a point where everyone wanted just Bob to play the lead. His debut on home video was in the phenomenal production ‘Living in Bondage’. This was in 1992. Between the time he featured in ‘Living In Bondage’ and 1995 when he featured in the romantic thriller ‘When the Sun Sets’, Bob who recently set up a modeling cum event packaging outfit which he christened ‘Sapphire Bond’ has featured in over 70 movies. 18 years after, Bob says it is possible that he would have featured in over 200 movies knowing that he has been very consistent on the turf.

In Bob’s acting oeuvre are such celebrated movie productions like ‘Evil Genius’, ‘Tokunboh’, ‘Blood Brothers’, ‘Risky Affairs’, ‘Pestilence’, ‘Ogbaje’, ‘My Girl’, ‘One Dollar’, ‘Gun Powder’, ‘Apology’ and ‘Beyond The Alter’. Currently the host of the Gulder Ultimate Reality Sho, Bob’s most memorable run as many of his teeming fans will agree was his gripping run as a randy Reverend in that ground breaking religious thriller from the stable of Gabosky films ‘Beyond the Vow’. Bob not only raised the roof there, his effort in the movie raised his popularity rating and it correspondingly fetched him a number of industry awards.