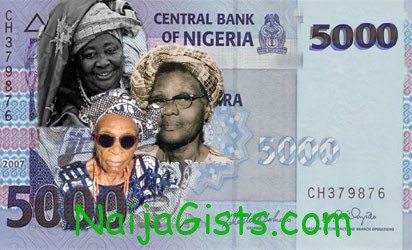 More Nigerians have expressed outrage over plans by the Central Bank of Nigeria, CBN, to introduce new N5, 000 note into the circulation and convert some of the denominations into coins next year. naijagists.com

The new move by the CBN is being rejected by the majority of Nigerians who see it as a way of impoverishing the masses and worsen corruption in the country.

Prof. Adeola Adenikinju, a professor of Economics, University of Ibadan said the policy would have drastic effect on Nigerians and should be discarded.

According to him, the timing is wrong and this is not the priority of Nigerians now, adding that converting some of the currency notes to coins would lead to adjustment in the prices of goods and services which will lead to inflation.

He added that the introduction of N5,000 note would worsen corruption as it would be easier for people to carry large volume of money in concise form.

Adenikinju urged the CBN to drive through its cashless policy instead of introducing new currency note as the move would be counterproductive.

Prof. John Ayoade, a professor of Political Science, University of Ibadan, said that the new policy would have more negative impact on Nigerians as it would further promote corruption and make theft and capital flight possible.

“Now that the money will become handy, it will reduce the bulk of carriage. One bundle of N5,000 notes will now be N500,000 while two will be N1 million. This will aid those that steal money.

“This new move will profit the high income earners. This kind of policy is not democratic. In the United States, the highest denomination is one hundred dollars, while the minimum wage in Nigeria is N18,000 and with N5,000 note, you will only be able to get about four of it.

It is a risky one for the low income earners, if, as a low income earner, you lose one of them, a substantial part of your salary is gone and it will cause problem in your home,” he stated.

Ayoade said the move by the CBN is not good for the system and should be resisted by the people as it could lead to inflation in the economy, adding that “when you have big denomination, it then becomes the baseline to raise the prices of goods.”

Lagos lawyer, Bamidele Aturu, described the move by the CBN as rubbish, saying it would certainly lead to inflation and price increase in goods and services.

“It is not necessary; it will promote corruption because people can now carry more money. We should face the problem of creating jobs in the nation,” he said.

Comrade Biodun Aremu, former Convener, United Action for Democracy, UAD, said the policy was the most callous instrument that would further deepen the agony and frustration of Nigerians.

“It will certainly lead to inflation. The concern of Nigerians is the purchasing power of the naira and not the quantum. People should campaign against it. Part of the bait is to use the new currency note to honour women activists but we can honour them in some other ways,” he stated.

Comrade Debo Adesina, President, Coalition Against Corrupt Leaders, CACOL, said the CBN’s decision was not wise as it would encourage money laundering, lead to inflation and negate the cashless policy of the government.

“It is unwarranted, unnecessary and uncalled for and should be discarded. We propose that the highest denomination should be N20. We should ensure that those who offer bribe are discouraged from doing so.  The N40 billion for the project can be used to improve the lives of Nigerians,” he said.

Mr. Yinka Odumakin, spokesperson, Save Nigeria Group, said the decision was the most wrong-headed one to be taken by the government

“If you think of cashless policy, why the N5,000 note? The CBN should shelve this idea. The prices of goods and services will rise. It is a waste of money and it will promote corruption,” he added.

Mr. Lanre Odubote, a lawmaker in the nation’s House of Representatives, said he would never support the move as it would reduce the standard of living of the people and promote corruption.

“It will encourage money laundering and people will be able to pocket so much money. The policy will become a mirage. I am not in support of it,” he stated