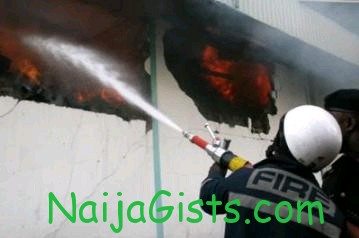 If there is any sector in the economy that is unarguably neglected by the governments, both at the federal and state levels, despised by the public and on its own exacerbates its image problem through arrant inefficiency and abject levity, it is obviously the Fire Service sector.

It is not an exaggeration to say that whenever a career option in the police force, army, navy and air force, fire service and immigration and custom services is presented to any youth of today that he or she, with a high sense of disparagement, would wave the option of choosing a career in the fire service aside.

The reason for the unattractiveness of a career in the fire service cannot be far-fetched as fire fighting profession has never been enviable in this part of the world. In fact, fire fighters are not well-remunerated, not well-trained and not-well equipped. Given these discouraging attitudes from both the public and the governments, it is therefore not unexpected that fire fighters are ill-motivated so much so that their response to duties has remained appalling.

An African proverb says: “The man that starves his monkey of banana fruits should not expect any gymnastic display from such monkey.” In line with the foregoing saying, today’s fire fighters can hardly display any sense of alacrity and empathy in the course of their duties. Fire fighters are wont to give untenable excuses whenever they are contacted to respond to any emergency that falls within their professional purview.

They are fond of saying, “There is no water,” “There was serious ‘hold-up’ on our way here” or “The property was not accessible enough.” In fact, some of the excuses they give often sound unprofessional and childish. But the truth remains that as a nation we cannot move ahead with this kind of fire service that is fraught with excuses.

A casual visit to any of the fire fighting stations in Lagos would reveal that most fire fighters loiter around fire station complex without taking cognizant of the fact that they may be called upon for any emergency assignment. In my view, they are not always proactive. If they are known to be proactive, their hackneyed excuse of “There is no water” would not have been a commonplace. In my view, the problem with the sector is a motivational one rather than other factors which many stakeholders are literarily pointing their fingers at.

Going through news reports on fire incidents in the media, it is rarely reported that the fire service was able to checkmate any fire incident. Any story that bothers on fire always end on a sad note that the property concerned was razed down. One of the floors that houses this pacesetting newspaper that is at the moment conveying my views was recently not spared from fire incident and tardy response of the fire service. Without being told, it is obvious that the loss which the newspaper organization incurred is incalculable. The question now is, “If the fire service can no more play its statutory role and meets societal expectation then what is the essence of considering it for budgetary allocation on yearly basis? ” Or “Are fire service stations scattered across the nation merely to answer the name “Fire Service” and pay salaries to some Nigerians?”

No one can rightly answer this question except President Goodluck Ebele Jonathan who is poised to write his name in the good book of political history through the Transformation Agenda. The answer to the question would no doubt provide some meaningful solutions to the problems that are bedeviling the fire service sector.

It would be recalled that a News Agency of Nigeria (NAN) report dated August 2, 2011 reveal that the Minister of Interior, Abba Moro said that “the federal government will inaugurate a Committee for the restructuring and reshaping of Nigeria’s Fire Servce…”

According to the report, the Committee would deliberate on how to improve the welfare of fire fighters, particularly as it relates to their training and remuneration.

Secondly, the Committee would also deliberate on how to equip the Federal Fire Service and also train its personnel. However, the findings of the report is not the point of view of this piece.

As it is now, I doubt if the lives of fire-fighters are insured in this part of the world. Besides, I also doubt if they are paid risk allowances each time they finish responding to any emergency assignment. I also do not think that fire-fighters are trained to be prepared for their duties at all times. If they are trained, then one would begin to wonder on where they got the “snail-speed” response to duty from. This view cannot be faulted as fire fighters are wont to commence the search for water only when they are informed of a fire incident. Even when they are also informed of collapse building they also give the excuse of traffic “hold-up” despite the fact that their vehicles are equipped with siren.

In fact, I do not think that fire fighters in our clime have both the technical and human capacities to put off fire that may occur on a high-rise building. There is no denying the fact that at this stage in the global history when the world is literarily becoming inflammable due to unprecedented advance in technology that the fire service sector ought to be prepared in all its ramifications. But as it is, the service is one of the most neglected by various governments.

In my view, it is not proper for fire service stations to be literarily scattered across our cities without making any meaningful impact in the society. I am therefore through this medium suggesting that the problems bedeviling the fire service sector should be seriously looked into by both the Senate and the House of Representatives, while the Minister of Interior on his own should not rest on his oars in ensuring that the sector is fully revamped.

About the author: Asabor wrote from Lagos via PM