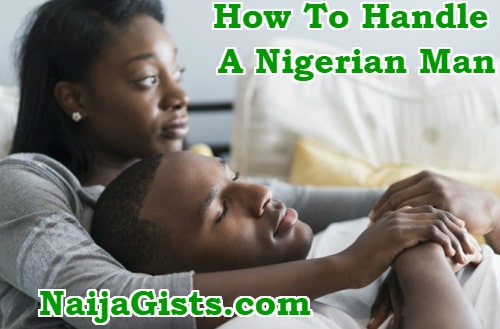 How To Deal With A Nigerian Man In A Relationship

People want to be married by any means necessary as being married accords you more respect in the Nigerian society. Ladies are all about making diverse forms of adjustments to convince the Nigerian male of their suitability for marriage.

Going about getting a Nigerian man to propose is a task which has to be carried out with utmost subtlety as aggression will most likely get you nowhere. Make an effort to be gentle so you don’t come across as a desperate female. Nigerian men can smell desperation from a mile away and love to exploit it, therefore watch it.

Here are some ways to handle a Nigerian man which may convince him to make it official and eventually pop the question. These points are not fool proof as every human is entitled to free will therefore; there is no sure way to get a Nigerian man or any man for that matter to propose. But these are quite a number of ideas and methods you can apply.

Be A Good Cook

The Nigerian society has not quite yet evolved to the stage where it is okay for a woman to be clueless when it comes to the matters of cooking. A Nigerian man clearly expects the woman he intends to marry to know how to cook a variety of delicious meals. Nigerian men tend to gravitate towards ladies who are skilled in the act of cooking. Therefore being a bad cook significantly reduces your chances of getting hitched to a Nigerian male. If you lack the ability to cook properly, don’t feel too bad it is not too late, after all nobody was born with the ability to cook. It is a skill which had to be learnt, so learn it.

It is no secret the Nigerian man loves respect; the Nigerian society in general is big on respect. A Nigerian man will need to see that you possess that quality; you need to be a woman who accords him the respect he deserves. Avoid out rightly criticizing him and his ideas. Don’t bruise his ego with careless words and belittling remarks even when you are tempted to do so. Don’t be too domineering, firmly assert yourself when you need to but not in a controlling way. A Nigerian man would not want to end up with a lady who does not listen to him and cannot respect him or his opinions. Your being disrespectful will only chase him away when he has had enough of it.

Avoid acting too clingy and jealous when you are with a Nigerian man. Granted being a little bit jealous sometimes when he interacts with other females is allowed. But do not make it a habit and don’t let it become an obsession. No Nigerian man wants an insecure woman who is always suspicious of his every move.

Most men would go to great lengths to have their peace of mind; which means most Nigerian men will definitely stay away from a woman who has trust issues. If he associates your presence with constant nagging, complaints and unreasonable accusations, he will hardly ever want to be around you or have anything permanent to do with you.

Be A Lady Of Character

He may temporarily date a lady lacking in character for one reason or the other. Emphasis on the word temporarily, don’t expect it to last.

Make Him Feel Love And Wanted

Granted Nigerian men are most definitely not the most romantic men in the world. However it still does not change the fact that they also yearn to be loved and wanted. They might not act like they require it of you but they actually do. Freely express your love and affection for him. Don’t act cold and unfeeling, because when you do that long enough you just may make him think that his presence is not appreciated or needed.

Avoid Being Too Demanding

This is one serious way to scare a Nigerian man away. Don’t always be full of series of demands financially and otherwise. A Nigerian man will be quick to assume that you are using him for some kind of financial gain. He would easily get tired when it appears that you always have a list of things to demand for whenever he is present. Avoid unnecessary demands be conservative in your requests and spending.

The Nigerian society has moved passed the stage of a completely dependent woman. Most Nigerian men want to see that you are skilled in one form or the other. They want a hardworking business oriented lady who can contribute positively to their lives. They want a woman who can stand on her own should the need arise.

You should be someone who can be of help and support; a lady who is not afraid to step out and make an honest living. Learn a skill or two and get your hands busy; it ups your chances of getting a Nigerian man to propose.  Nigerian men want women who bring more than child bearing hips to the table.

Let Him Have His Space

Every once in a while men need their space just some time to be alone. Show you are capable of letting him have a moment to himself. Other times, he may want just the company of his friends to catch up and just be a guy. Be understanding and let him have his time to unwind.

Good sex with a Nigerian man may score you points. But these points are cheap ones. Being good in bed and lacking in other basic areas may keep a Nigerian man but only for a while when it all wears off, he will walk; simply because there are thousands of women who can also please him sexually. So you need to bring more than sex to the table. Many Nigerian men have been known to abandon ladies who they have had sex with and married others who they consider pure and untouched.

Be careful with the kind of adjustments and changes you make to your life in the bid to win a Nigerian man’s heart and get a proposal. Do not become somebody you are not for the sake of a marriage proposal. You may end up unhappy and full of regrets.

These points will most likely set you on the right track. But once again, there is no sure way to get a Nigerian man to propose, if you push him too hard or try to force it he will definitely feel pressured and a typical man will run away. But you can try these out and hope for the best.

Be Certain About Your Relationship

Before working so hard in carrying out your various strategies to convince a man to propose, be absolutely sure that there is a relationship. To avoid misunderstanding and waiting in vain, be sure you are both headed in the same direction and have similar plans. Be certain of your motives for wanting to get married, so you don’t make hasty and wrong decisions.

Take out time to study your partner and don’t be too focused on getting a proposal. Be sure that sacrifices and compromises are not one sided. Both partners in a relationship should equally put in effort to making it work. Don’t completely alter your personality to suit someone else’s standards.

You should be certain of the Nigerian man in question and his character as well.  Compatibility in a relationship cannot be overlooked. Refuse to ignore your gut feelings and any warning signs.

Truthfully judge yourself and know the wrong things about you that could make you flawed as a wife and work on yourself. Strive to make yourself a better person, someone you can be proud of.

Finally, don’t hang on forever waiting or trying to force a Nigerian man to propose. There is someone out there for everyone. Recognize what you are worth and know when to call it quits. Most women realize when they are just being used listen to that voice and walk away if you have to.